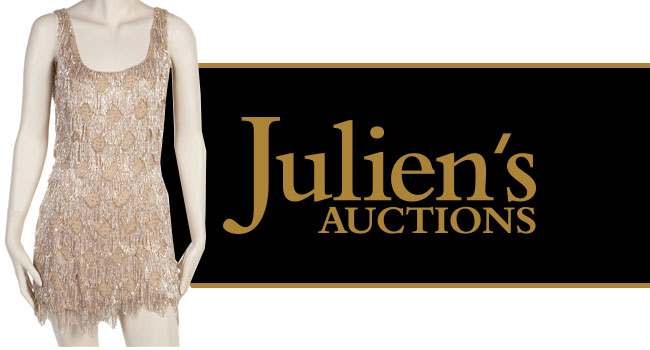 Julien’s Auctions has announced that Property from the Randi Rahm Archive, an auction exclusive featuring the designs of the internationally renowned fine couture fashion artist who has dressed Hollywood icons and some of the world’s most influential people from the likes of Beyoncé, Mariah Carey, Katy Perry, Carrie Underwood, Billy Porter, Christina Aguilera, and more, will be presented at the world record-breaking auction house to the stars’ Icons & Idols Trilogy: Rock N’ Roll And Hollywood extravaganza taking place on Wednesday, December 2nd and Thursday, December 3rd live in Beverly Hills and online a juliensauctions.com.

Rahm’s timeless couture gowns and suits have been gracing red carpets, magazine covers, and stages for over three decades. A classically trained conductor and concert pianist, Rahm’s design vision combines her love of dance, fine art, and music in all of her creations that are cultivated at the New York based, The Randi Rahm Atelier, one of America’s last standing couture-houses since 1998. Some of the designer’s signature couture styles are highlighted in the auction.

One of the top highlights is Rahm’s flapper inspired dress embellished with hand beaded nude and blush fringes and gold tone iridescent glass on nude silk chiffon worn by Beyoncé at Michelle Obama’s 50th birthday party in 2014 where she performed for the First Lady (estimate: $3,000 – $5,000).

It is one of four ensembles in the collection worn by the ground breaking style icon and most nominated female artist in GRAMMY history to be offered at auction. Other highlights include Rahm’s orchid and grey burnout silk “Twisty” gown with a twisted halter neckline and a high front slit worn by Mariah Carey in her 2005 music video for “We Belong Together” and in circa 2013 by Laura Osnes (estimate: $2,000 – $4,000); her custom one-shoulder, fitted, purple satin silk bodice gown worn by Carrie Underwood while performing “Mama’s Song” at the 44th Annual CMA Awards in 2010 in Nashville (estimate: $2,000 – $4,000).

Rahm’s orchid and grey burnout silk Twisty gown worn by Mariah Carey her fitted black satin crepe gown worn by Christina Aguilera to the 2007 Clive Davis Pre-Grammy Awards Party at the Beverly Hilton Hotel in 2007 (estimate: $2,000 – $4,000); Rahm’s short strapless silk, gazar tie-dye patterned aqua-blue cocktail dress worn by Katy Perry to the stage greeting of the “Katy Perry: Part of Me” at Roppongi Hills on September 25th, 2012 in Tokyo, Japan (estimate: $2,000 – $4,000); her designed grey chiffon gown worn by Edie Falco to The 14th Annual Screen Actors Guild Awards in 2008, in Los Angeles, where she won awards for outstanding performance by a female actor in a drama series and best ensemble in a drama for her work in The Sopranos at the 14th Annual Screen Actors Guild Awards on Sunday, January 27, 2008, in Los Angeles (estimate: $1,000 – $2,000); an abstract blazer adorned with 3D metallic pink flowers worn by Billy Porter on Andy Cohen’s Watch What Happens Live show in 2018 (estimate: $800 – $1,200); Rahm’s violet wedding gown worn by Gabrielle Union on the series finale of Being Mary Jane (estimate: $1,000 – $2,000) and more.