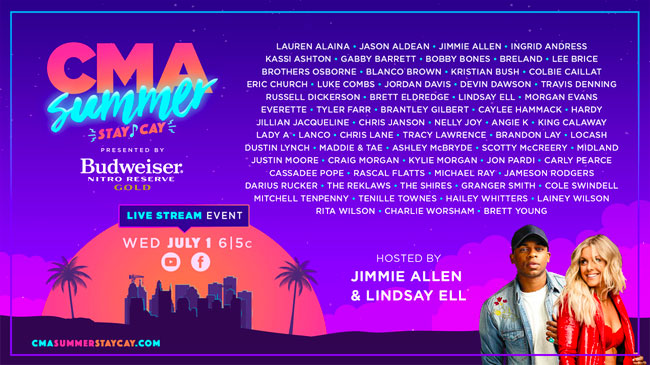 Kane Brown has been added to CMA Summer Stay-Cay presented by Budweiser Nitro Gold, livestreaming July 1st. Restless Road also joins as international artist Kaylee Bell teams with Morgan Evans for “Cocktails + Coffee,” a worldly conversation. The special will be hosted by chart-topping country artists Jimmie Allen and Lindsay Ell, and is a brand new, multi-hour live stream variety event sure to be one of the hottest nights of summer.

CMA Summer Stay-Cay presented by Budweiser Nitro Gold kicks off two of the hottest nights of country music this summer and is followed by CMA Best of Fest a three-hour retrospective hosted by Country Music superstar Luke Bryan, which airs Monday, July 13th at 8 pm ET/PT on the ABC Television Network.

Both events celebrate the legacy of CMA Fest, the world’s longest-running country music festival taking place in Nashville annually since 1972, which was postponed this year due to safety concerns amidst the COVID-19 pandemic. The festival will return to downtown Nashville June 10-13, 2021.