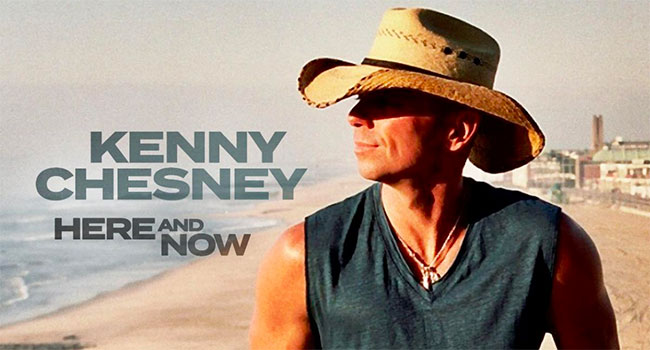 Insta grat track is second release from May 1st album

So much of how Kenny Chesney made Here And Now took the East Tennessee songwriter back to the things that drew him to Nashville, writing and making music originally. Very much a celebration of being wholly present, alive and in the moment, this album also takes a moment to reflect on the loves, friends and seasons in our life that have moved on to other places, realities or realms.

That moment is “Knowing You,” a gently reflective postcard to someone who’s gone. But more than mourning the loss, the simple country waltz embraces how alive the other person – be it a lover, soulmate or friend – made the singer feel, the rush of the moments shared and the fact that our caring for those people isn’t dependent on them being present.

“When I heard it, ‘Knowing You’ knocked me out,” says the eight-time Entertainer of the Year. “It was such a classic kind of country song you don’t hear any more, and it was so pure. And then, the idea you’re wishing the best for the other person, kind of smiling, knowing just what they’re doing and thinking, ‘Yeah, go enjoy the moment…’ is something the best people in our lives make us feel.

“And this song doesn’t have to be a lover who’s gone, or even a friend whose dream took them in another direction. It can be someone who’s passed away, just staring into the sunset, knowing they’re living that best part of life in heaven, maybe even looking down on you and smiling.”

Evoking Chesney favorites “On the Coast of Somewhere Beautiful,” “Who You’d Be Today,” “Hemingway’s Whiskey,” “Wild Child” or even “When I See This Bar,” there’s a timelessness to the connection and a wish for so much good for the other. Not merely wistful, but knowing wherever they are, life is just how they wish it to be.

“People tell me their stories,” Chesney explains. “It’s humbling hearing what a song has meant to someone, where and when they’ve played it. Funerals, weddings, big games, really important moments, or just alone in a dark time. When you realize what songs represent, it’s not a hit record, but actual chunks of people’s lives.

“For me, this song with that tempo – and the way the guys played it – brought back so much of the innocent hopefulness of country music, and it suggested so many people. It was one of those songs I knew we had to do.”

Here And Now arrives May 1st. With the anthemic title track, a surging reminder to find the good in every moment and savor being alive because each moment is a gift, heading for the Top 10 after just six weeks, the man The Los Angeles Times called “The People’s Superstar” returns with an album to lift people up, appreciate what they’ve got and maybe find some surprises along the way.

To get a taste, “Knowing You” is available at all digital outlets, starting Friday, April 10th.