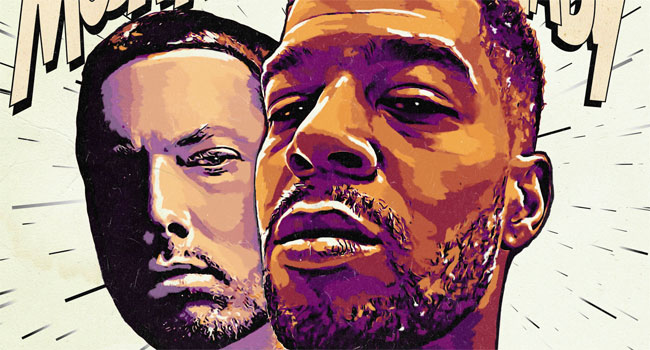 Ready to reach uncharted territory yet again, Kid Cudi and Eminem have released a blockbuster new single entitled “The Adventures of Moon Man & Slim Shady”. This marks the very first collaboration between these two icons. Produced by Dot Da Genius, J Gramm, and Eminem, the song serves up a masterclass in gravity-defying bars.

The pair have released a lyric video, which can be seen below, for the track that features the rappers as animated characters. The song talks about recovery and current events, including the COVID-19 pandemic and police brutality. ]

The collaboration follows Kid Cudi and Travis Scott’s collaboration “The Scotts,” which entered the Billboard Hot 100 at No. 1, following its April premiere during the record-breaking one-of-a-kind Fortnite in-game experience. Two weeks before, Kid Cudi dropped “Leader of the Delinquents,” which is set to appear on his previously announced seventh full-length studio album, Entergalactic.

In January, Eminem surprised fans by releasing Music To Be Murdered By without warning. The 20 track album includes collaborations with Ed Sheeran, Young M.A., Royce Da 5’9″, Juice WRLD, Anderson .Paak and others. A month later, Em became a member of YouTube’s Billion View Clubs for a third time following “Rap God” achieving the feat. The song follows “Not Afraid” (1.3 billion views) and “Love the Way You Lie” featuring Rihanna (1.9 billion views) in the club.