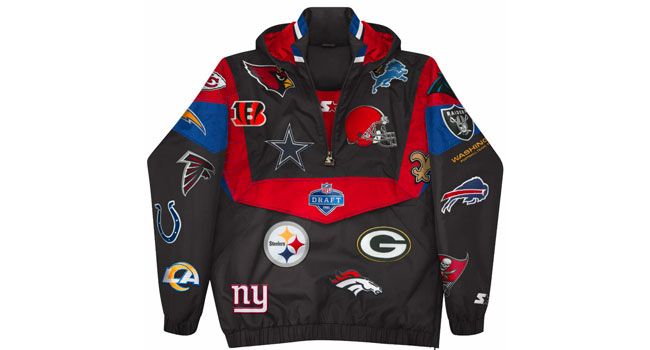 The National Football League (NFL) and Kid Cudi have teamed up to create a one-of-a-kind Starter pullover jacket to commemorate the 2021 NFL Draft, taking place April 29th through May 1st in Kid Cudi’s hometown of Cleveland, Ohio.

The symbolic Starter jacket showcases the NFL Shield, all 32-team logos, and Kid Cudi’s Moon Man logo in a mix of embroidered and chenille patches. The jacket features an all-over logo design, hidden front pocket, elastic waistband and cuffs and a hood with drawstrings. This limited edition jacket will drop on April 29th at 6:30 pm ET and will be available for purchase on shop.kidcudi.com.

Cudi’s seventh full-length studio album, Man On The Moon III: The Chosen via Republic Records, was released on December 11th, and is the most anticipated sequel of 2020 and a blockbuster befitting of the Man On The Moon legend. The 18 track album includes A-list collaborators.

Cudi blasted off into history with Man on the Moon: The End of Day in 2009. It has since gone 2x platinum, garnered three GRAMMY Award nominations, and seized a spot on Rolling Stone’s “500 Greatest Albums of All Time.” A year later, Man on the Moon II: The Legend of Mr. Rager claimed No. 3 on the Billboard Top 200 and went platinum.