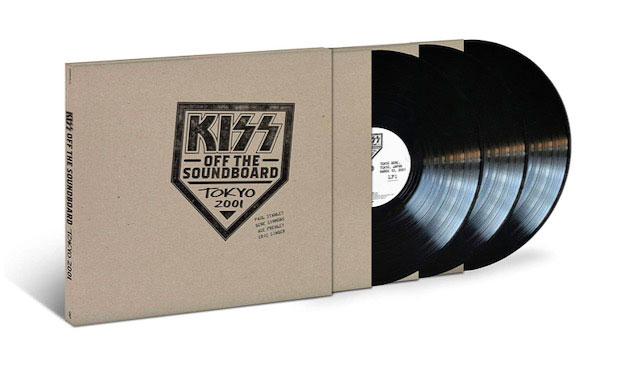 Kiss is digging into its vaults to launch a new official live “bootleg” series called “Off The Soundboard.” The first in the series celebrates the 20th anniversary of the band’s iconic show at The Tokyo Dome in Japan on March 13, 2001. Kiss Off The Soundboard: Tokyo 2001 will be available as 2 CD and 3 LP sets on June 11th via UMe.

Tokyo has always held a special place of importance throughout the KISStory of the band and Off The Soundboard: Tokyo 2001 captures Kiss giving the packed 55,000 seat venue the quintessential Kiss live experience, direct from the soundboard with such classic anthems as “I Was Made for Lovin’ You,” “Heaven’s On Fire,” “Rock & Roll All Night” and the No. 7 1976 Billboard hit “Detroit Rock City,” as well as rarities such as “I Still Love You” from 1982’s Creatures Of The Night. The 21 track concert is a celebration of the band’s musical legacy and features co-founders Paul Stanley and Gene Simmons, with Ace Frehley on guitar and Eric Singer on drums.

The news comes as Netflix is nearing a deal to distribute the band’s biopic. Shout It Out Loud will focus on Simmons and Stanley’s origins as kids from Queens who formed an unlikely friendship that morphed into Kiss after enlisting Frehley and Criss. The band’s anthems will be a big part of the movie as they overcame the “hair” band era and became a mega force in rock and roll.

Kiss is set to return to the road in their current lineup this summer for what is to be their final trek together with the End of the Road Tour as they rescheduled pandemic-postponed dates. The band will now launch its European End of the Road trek on June 2nd in Antwerp, Belgium, and wrapping July 15th in Budapest, Hungary. The 22 trek rescheduled 2021 End of the Road North American tour dates with David Lee Roth now kicks off August 18th in Mansfield, MA and wrap on October 6th in Lafayette, LA. Original tickets will be honored at all new dates.