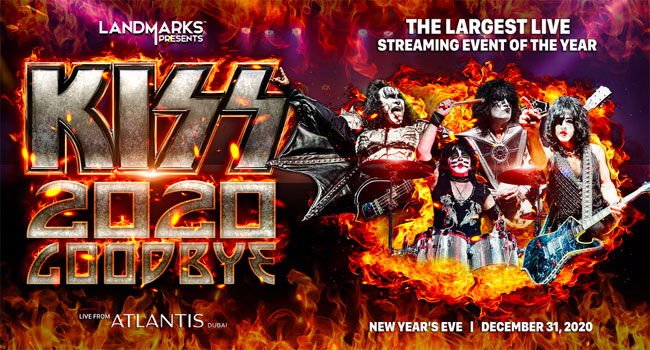 It’s been 296 days since the KISS stage went dark. Roaring back to life and proving that KISS never does anything small, the iconic Rock & Roll Hall of Fame, multi-platinum selling band has announced the biggest concert event of the year, sending off 2020 in KISS style on New Year’s Eve at iconic destination, Atlantis, The Palm in Dubai. In a year when stages have been dark globally and fans have been craving a true live music experience, Landmarks Live Presents is set to deliver the largest KISS show of the band’s storied career live from The Royal Beach at Atlantis Dubai with numerous world record attempts for largest ever pyro display.

Filmed with more than 50 cameras and 360-degree views, the show will be produced by Landmarks Live Presents will be filmed in 4K and can be seen globally with a 1080p livestream and ticketing powered by Tixr and available on any computer, mobile, and Apple TV.

Putting nearly 400 crew members back to work for the first time in eight months, the production will take extraordinary on-site COVID protocols including daily testing and biometric crew wristbands to ensure highest safety standards for the entire event. Performed in front of a live COVID-screened and safe audience in Dubai, this will be a first of its kind hybrid live-ticketed and live streamed event.

“After nine months of this pandemic darkness the world may finally be seeing light of day. On New Year’s Eve KISS will rock the heavens, shake the earth and blaze the way out of 2020 with the largest and most bombastic celebration in our and anyone else’s history. We all need it. We all deserve it. Here’s to 2021,” states KISS.

“Working with KISS is an honor and dream come true for me. To be able to capture them in such an explosive and record-breaking way will certainly be a highlight of my career. This show will be unlike any other show or live stream of 2020,” says Daniel E Catullo III, creator, director and executive producer of Landmarks Live. “Logistically, this was the largest undertaking and production I’ve ever done and during a pandemic made it all the more challenging. Our crew is comprised of over 400 people from all over the world. It has been a very complex show to put together, but we are happy to bring the world something of this size at a time when it is needed the most. It’s a perfect way to say goodbye to 2020 or KISS 2020 GOODBYE.

“We are incredibly excited that KISS and Landmarks Live has chosen Atlantis Dubai for this first-of-its-kind initiative,” shares Timothy Kelly, Executive Vice President and Managing Director, Atlantis Dubai. “Atlantis has a reputation as being a trailblazer in the world of entertainment and we know that this event which will be watched by millions across the world will provide electrifying, ever-lasting memories for all who join in the celebrations.”

The show will also feature a live pre-show that can be streamed for free. The KISS concert and pyro show will feature numerous price points to accommodate all New Year’s Eve celebrators safely from home. While the show will be broadcast live timed to midnight in Dubai, ALL of the streaming packages allow a replay option so that fans can re-watch timed to their own midnight festivities.

KISS will return to the road in summer 2021 as they rescheduled pandemic-postponed dates. The band will now launch its European End of the Road trek on June 2nd in Antwerp, Belgium, and wrapping July 15th in Budapest, Hungary. The 22 trek rescheduled 2021 End of the Road North American tour dates with David Lee Roth now kicks off August 18th in Mansfield, MA and wrap on October 6th in Lafayette, LA. Original tickets will be honored at all new dates.