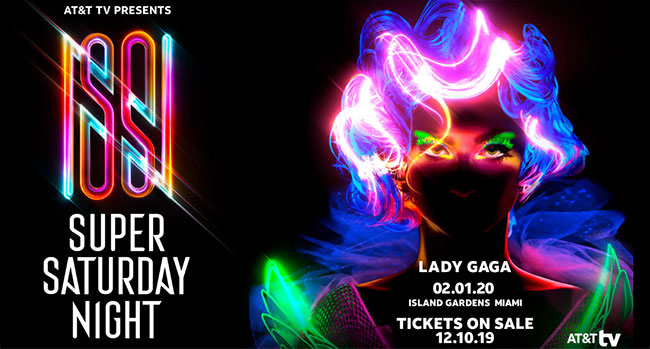 Larger-than-life megastar Lady Gaga will perform at the 2020 newly named AT&T TV Super Saturday Night on February 1st in Miami, celebrating the event’s milestone tenth anniversary the evening before the Big Game. Tickets will go on sale to the public on Tuesday, December 10th at 10 am ET through att.com/supersaturdaynight.

AT&T TV Super Saturday Night, which will be livestreamed at twitter.com/ItsOnATT, will be held at Meridian at Island Gardens. Meridian is a 65,000 square-foot custom built multi- level premier live event and entertainment experience that will play host to additional VIP events.

“I’ve had some incredible experiences performing at the Super Bowl,” states Lady Gaga “and am very excited to join the party again this year headlining AT&T TV Super Saturday Night!”

“Year after year, in cities all across the country, we’ve built specially-curated venues from the ground up to provide both our mega-star performers and their adoring fans a one-night-only concert experience they will not forget. And this year will be no different,” says Valerie Vargas, senior vice president – advertising and creative services, AT&T. “In Miami, we’re going to go big and bold – two words synonymous with Lady Gaga. Over the course of her career, she has undoubtedly delivered the most epic performances that have defined a generation.”

AT&T TV is our next-generation premium video service featuring the best of live TV, on-demand and access to thousands of popular apps without leaving the experience. AT&T TV is currently piloting in select markets, including Miami, and will launch nationwide next year.