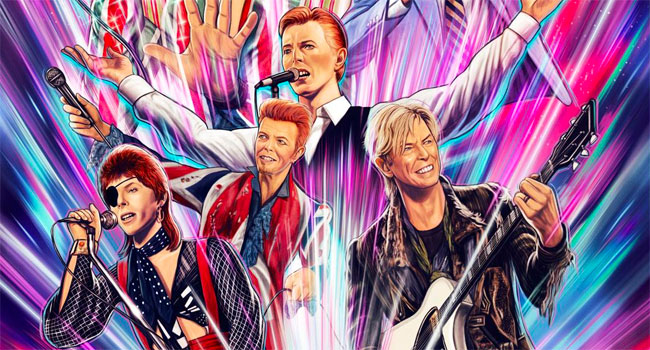 ECHO has announced its officially licensed limited edition David Bowie Print Series. A selection of today’s biggest and brightest visual artists create works inspired by the man who has transcended the boundaries of music, art and fashion for over five decades. The series will showcase work by some of today’s hottest artists, including NC Winters, Ken Taylor, Jermaine Rogers, Frank Kozik, Gabz, Luke Martin, Tara McPherson, Justin Hampton, Miles Tsang, Sam Gilbey, and other surprise artists to be announced.

ECHO is also excited to present the David Bowie Print Series 2021 Subscription, which will also include Sam Gilbey’s print, The Sound of Light. Subscribers will receive exclusive Subscription Variants of all 12 prints in the 2021 series. These variants will be screen printed on creamy pearlescent gallery stock with a semi-metallic finish, and only available via this subscription. In addition to the 12 series prints, subscribers will get an additional (and exclusive!) 13th print, plus a host of other cool surprises shipped directly to their doorstep in three separate shipments during 2021. Only 80 of these subscription sets are available.

Prints and subscriptions can be purchased via ECHO’s website. Other licensed print series include KISS, Jimi Hendrix, Pink Floyd, AC/DC, and more surprises to be announced along the way.