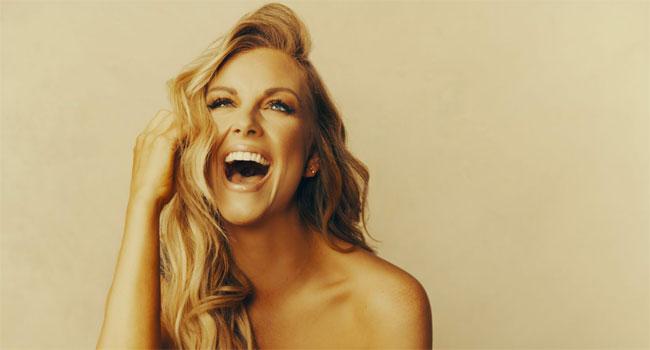 On Global Forgiveness Day, chart topping musician, vocalist and songwriter Lindsay Ell is opening up like never before with her new song “Make You” – out now digitally with any pre-order of her forthcoming sophomore album Heart Theory, which arrives August 14th.

Co-written by Ell and GRAMMY-nominated singer-songwriter Brandy Clark, the track is the first time Ell publicly addresses being a survivor of sexual violence. The song finds Ell intimately exploring the deeply personal effects on her life after being raped at 13 years old — and again at 21, although the song only discusses the first instance. On Heart Theory – which takes listeners through Ell’s personal experience of the seven stages of grief – “Make You” appears as the first song in the acceptance stage, a reflection of Ell’s determination to use her platform to help other sexual trauma survivors.

Ell explains how meeting young survivors made her realize she couldn’t keep her own experience hidden any longer.

“Three years ago at a visit to help launch the music program at Youth For Tomorrow, I sat down in a conference room with a few girls aged 12-18 who had all been victims of rape or sex trafficking,” she states. “I shared my story, they shared their stories, and I was so inspired. Walking out of that room that day I knew the time had come to share my story more widely, otherwise I would be denying myself an opportunity to connect and help other girls or boys, like those in that room. It’s a very difficult thing to do, but an incredibly necessary thing to talk about. We don’t realize how much this stuff is happening in our own community, and that is partly due to not discussing it.”

“Once I decided it was time to share my story, there was specifically one co-writer who came to mind. I called Brandy, an absolute wordsmith and songwriter genius, and asked her if she would write this song with me. She fearlessly and immediately said yes,” Ell shares. “The day we wrote ‘make you’ I knew we had written something special that will hopefully help others to not feel alone in their survival. And more personally, it was finally the moment in my life where I got to validate that little girl inside – letting her know that ‘I see her and I love her.’”

In conjunction with the release of “Make You,” Ell has launched the Make You Movement, a charitable fund whose mission is to help organizations that support at-risk youth, domestic abuse and sexual assault survivors by provided funds on an as-needed basis.

Ell has committed to donate all her proceeds from “Make You” to the Make You Movement. The first partner organization receiving funds from Make You Movement will be The Rape, Abuse & Incest National Network (RAINN), which is the United States’ largest anti-sexual violence organization.

“I believe music has the power to heal. The reason I decided to share my story at this point in my life is that I want it to be able to help a lot of people; and the best way to help people is to not only raise my voice, but to raise money in an effort to raise awareness and understanding,” Ell adds. “I want to support programs that help girls & boys who may have been victims and support safety and prevention programs that aim to keep potential victims safe. Finally writing ‘make you’ has given me the courage to not let my past decide my future, so I am taking action in order to do just that. My hope is that my actions and song will inspire the same in others.”

The Make You Movement is administered by the Community Foundation of Middle Tennessee.

The release of “Make You” on Global Forgiveness Day further amplifies Ell’s belief that all types of forgiveness – including self-forgiveness – is vital to healing. Speaking to PEOPLE exclusively, Ell elaborates, “I wanted to release it on Global Forgiveness Day. Forgiving people in our past is a huge thing for whatever reason, but forgiving yourself is so important. There’s an incredible amount of healing that can happen, and it can’t happen until you can truly open up that forgiveness for your own heart.”

“Make You” follows the release of two tracks on Heart Theory – “i don’t lovE you” & “wAnt me back” – the latter impacting country radio on July 13th. Ell has amassed more than 123 million on demand streams to date and is currently nominated for two 2020 ACM Awards – New Female Artist of the Year & Vocal Event of the Year.