In the early ’50s, Little Richard Penniman combined the spirit of church music, the barroom-hewn raunch of blues and the swing of New Orleans jazz and turned it into something altogether new — rock ’n’ roll. When the Macon, Ga. native signed to Art Rupe’s Specialty Records in Los Angeles, he was in turn dispatched to New Orleans to record at Cosimo’s legendary studio. Over the course of several sessions, the Little Richard sound began to develop around hits like “Tutti Frutti,” “Good Golly Miss Molly,” “Long Tall Sally” and “Lucille,” to name a few.

On June 2, 2015, Specialty Records — a unit of Concord Music Group — will release Directly From My Heart: The Best of the Specialty & Vee-Jay Years, an all-new three CD box set containing 64 songs that chronicle Richard’s Specialty and Vee-Jay years — 1956 to 1965. The collection contains Richard’s classics as well as B-sides and rarities. Also included is a 30-plus page illustrated booklet featuring a handful of rare photos plus new liner notes by singer/songwriter/music historian Billy Vera.

Many artists begin their career on small labels and work their way up to the majors. Conversely, Richard began his recording career at RCA Victor, brought to the label’s attention by an Atlanta DJ. There he released four singles, no hits among them. Next he signed to Don Robey’s Houston-based Duke/Peacock Records, initially as part of the Tempo Toppers band and later as a solo. The solo sides remained unreleased until Richard struck gold at his next destination, Specialty Records.

It was at New Orleans’ legendary J&M Music Shop that Richard chanced upon Specialty’s New Orleans A&R rep, Bumps Blackwell, who brought him to the attention of Rupe in Los Angeles. On September 14, 1955, Richard, Blackwell, and New Orleans’ R&B “A team” of session players (Lee Allen and Red Tyler, saxophones; Huey Smith, piano; Justin Adams, guitar; Frank Fields, bass and Earl Palmer, drums) went into Cosimo Matassa’s studio on Rampart Street. Sadly, despite the roomful of talent, the session was, as Vera describes “an exercise in commonplace.”

An unexpected bout of magic would shortly ensue. As Vera writes, “During a lunch break at the Dew Drop Inn, Richard hopped up on the piano and began shouting out a ribald tune he always performed, usually in drag, for those college boys, ‘Tutti Frutti, Good Bootie.’ Blackwell’s eyes lit up, for the first time hearing something special in the entertainer. Spotting local songwriter Dorothy LaBostrie across the room at another table, he asked if she could clean up the naughty lyric for public consumption. She did so back at Cosimo’s and, ‘Wop bop-a-loom-bop alop bam boom,’ a hit and a career were born.”

Over the next two years, Little Richard went on to place fourteen songs in the Rhythm & Blues top ten. These include his iconic performances of “Lucille,” “Jenny Jenny,” “Keep a Knockin’” and “Good Golly Miss Molly.” The astonishing fact is, all these classics were recorded within a mere 18-month period.

Richard continued with Specialty until 1964, when he was brought to the attention of Chicagoans Vivian Carter and Jim Bracken — whose first initials formed the name of Vee-Jay Records. Having freshly lost both The Beatles and The Four Seasons, and having lost control of the company in a move to the West Coast, the label was on its final legs. It didn’t help that in the studio Richard used his road band, the Upsetters, who were not quite studio quality at a time the Wrecking Crew was setting the standard. On top of that, the Beatles had broken big, and a fellow flamboyant Georgia native named James Brown had broken onto the R&B scene with a brand new bag. With a young Jimi Hendrix on guitar, Richard recorded a Don Covay tune (Covay had once been employed by Richard as his chauffer and opening act), “I Don’t Know What You’ve Got But It’s Got Me,” which reached #12 on the R&B chart. The song was done in James Brown’s style and briefly brought Richard back. However, music had changed, and the R&B sounds of the day were now emanating from Stax and Motown.

Little Richard continued to make records for South Los Angeles’ Modern Records, CBS R&B subsidiary OKeh, Brunswick, and briefly, Specialty again (in 1971), before signing to Reprise, where his “Freedom Blues” cracked the Top 50 pop and Top 30 R&B. His peak recording years behind him, Richard remained on the scene into the ’80s and early ’90s as a colorful personality.

Vera elaborates: “Changing his look, wearing an outlandish wig, outrageous outfits and letting his large personality come out, he became a sought after guest on talk shows, like Johnny Carson, Dick Cavett and Mike Douglas, taking over every conversation and talking over even the hosts. Couch potato America loved it and high paying concerts followed.”

In recent years, the Rock ’n’ Roll Hall of Fame inductee and Hollywood Walk of Fame star recipient has stayed closer to the homefront. But Directly From My Heart: The Best of the Specialty & Vee-Jay Years is a reminder of the time, place and circumstance that helped define rock ’n’ roll. 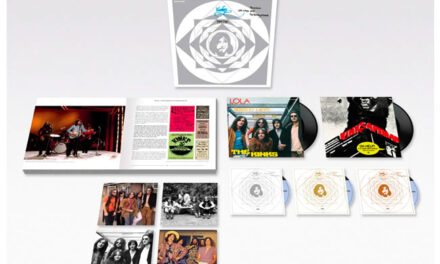