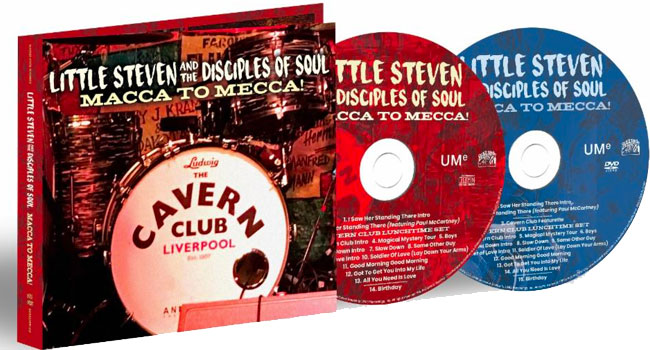 In the fall of 2017, when Little Steven landed in Liverpool on his sold out European tour with his newly reformed band the Disciples of Soul in support of Soulfire, his first new album in nearly two decades, the Rock and Roll Hall of Fame musician, songwriter and lifelong Beatles fan played an extraordinary surprise set outside of the legendary Cavern Club as a tribute to the seminal band that inspired him and so many others to pick up a guitar and start a band after witnessing their musical revolution on The Ed Sullivan Show in 1964. The intimate lunchtime gig saw Little Steven aka Stevie Van Zandt lead his 15-strong band through rocking renditions of “Magical Mystery Tour,” “Good Morning, Good Morning,” “Got To Get You Into My Life,” and “All You Need Is Love,” alongside iconic songs famously performed by the nascent Fab Four, including “Boys” (originally by The Shirelles), “Slow Down” (by Larry Williams) and “Soldier Of Love” (first recorded by Arthur Alexander).

“Playing in the same venue where The Beatles started their careers was a childhood dream of mine come true,” says Van Zandt. “This was a band that set me on course for a life of music. For my rock ‘n’ roll religion, The Cavern is the first sacred site (after the four clubs in Hamburg they played!). It was an honor – no, make that an epiphany – to perform there.”

Fortunately for those that weren’t there to witness this once-in-a-lifetime event, the concert was professionally filmed and expertly recorded by Van Zandt’s touring film and audio crew and is now slated for wide release on CD/DVD as Macca To Mecca on January 29th via Wicked Cool Records/UMe. The 13 song love letter to the Beatles kicks off with a riveting performance of “I Saw Her Standing There” recorded at The Roundhouse in London in November of 2017 with a special appearance by Paul McCartney.

Macca To Mecca, which was previously only available as part of the vinyl box set and Blu-ray editions of his concert album, Soulfire Live!, includes the complete Cavern Club concert in both video and audio, exclusive interviews, behind-the-scenes footage and a special documentary that sees Van Zandt honored with a brick in the club’s hallowed Wall of Fame before leading his band through swift rehearsals of Beatles songs mere minutes ahead of their performance.

The Macca To Mecca concert audio has also been added to a newly expanded 4 CD version of Soulfire Live!, which will be also be released on January 29th. Culled from the best performances from the band’s North American and European concerts, this live collection features Van Zandt and the Disciples of Soul taking listeners through a musical history lesson as they blast through an arsenal of songs spanning rock, pop, soul, blues, funk, doo-wop, reggae and everything in between. Nearly every song from his 2016 album Soulfire is represented along with inspired covers and classic tracks from his early catalog.

Among the album’s many highlights are original songs from throughout Little Steven’s illustrious solo career – including classics like “Standing In The Line Of Fire” and “I Don’t Want To Go Home” – alongside a number of favorite cover versions like The Electric Flag’s “Groovin’ Is Easy,” Etta James’ “Blues Is My Business,” and James Brown’s “Down And Out In New York City.

In addition, Soulfire Live! includes Van Zandt’s inimitable introductions, detailing each song’s unique history and singular spot in his life and illustrious career. Disc 3 showcases special guest appearances from some of Van Zand’ts closest friends, collaborators, and favorite artists and includes inspired versions of Moby Grape’s “Can’t Be So Bad” performed with the legendary San Francisco band’s founding member, Jerry Miller; the Motown classic, “Can I Get A Witness,” performed with New Jersey’s own Richie Sambora; The J. Geils Band’s “Freeze Frame” with vocals from the one and only Peter Wolf; and “Tenth Avenue Freeze-Out” and Little Steven’s own “I Don’t Want To Go Home,” both joined by Bruce Springsteen.

In a year like no other, Van Zandt has kept extraordinarily busy with a slew of releases and projects, including the release of Rock N Roll Rebel – The Early Work, a multi-format box set that collects together all of his pioneering early solo career albums between 1982 and 1999, as well as the landmark protest album, Sun City, by Artists United Against Apartheid, the supergroup of musicians brought together by Van Zandt and record producer Arthur Baker to fight racial injustice in South Africa; an acclaimed new record with Bruce Springsteen and the E Street Band; and an exuberant new holiday song penned for Netflix’s just-released movie, The Christmas Chronicles 2, directed by Chris Columbus. The joyous, soul-filled romp, “The Spirit Of Christmas,” sees him reuniting with his friend, the incomparable Darlene Love, who he worked with on their holiday hit “All Alone on Christmas” for Home Alone 2: Lost In New York, and her raved about 2015 album, Introducing Darlene Love, which he produced. The song is featured prominently in the sequel with a joyous onscreen musical number performed by Love and Kurt Russell who bring some Christmas magic to weary holiday travelers in a bustling airport terminal in the 1990s.

In celebration of “The Spirit of Christmas” and the Christmas spirit, Van Zandt, who regularly DJs on his Little Steven’s Underground Garage channel on SiriusXM and the nationally syndicated show of the same name, has put together a playlist featuring some of his favorite holiday songs. Kicking off with Chuck Berry’s immortal “Run Rudolph Run,” Little Steven’s Christmas Party Playlist mixes up Christmas classics with lesser known gems and includes songs by Bob Seger, The Kinks, Slade, Brian Setzer, Jan & Dean, Louis Prima, Joe Pesci, Dion and Ringo Starr alongside Van Zandt’s original Christmas tunes, “The Spirit Of Christmas,” “All Alone on Christmas” and his inspired, horn-drenched rendition of The Ramones’ “Merry Christmas (I Don’t Want To Fight Tonight).”