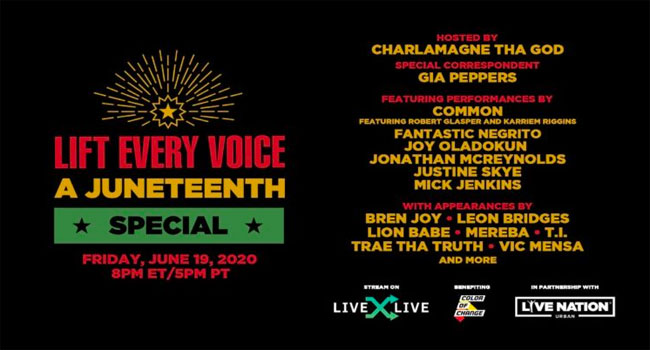 Now more than ever, it’s a time to come together and celebrate how far the African American community has come and center the ongoing fight for justice with prominent voices in culture. During the event, viewers will hear from artists in the world of hip hop, R&B and Gospel, with unparalleled performances and discussions around progression, celebration and unity in this one-off special.

“Juneteenth is the ultimate celebration of Black history and heritage. Live Nation Urban is proud to partner with LiveXLive and Color of Change to bring light to a day that has been revered by African Americans for generations. Its cultural relevance and significance globally cannot be understated,” says Brandon Pankey, VP, Live Nation Urban.

“We’re proud to partner with Live Nation Urban, Color of Change and these amazing artists for a Juneteenth celebration and discussion of black music and culture,” states Robert Ellin, Chairman and CEO of LiveXLive. “Now more than ever we must uplift, elevate and celebrate black voices and unify through the power of music and art.”

In addition to the Juneteenth Special with Live Nation Urban, LiveXLive has added Juneteenth, the oldest known US celebration of the end of slavery, to its list of annual paid holidays joining a growing number of companies like Nike, Twitter, Square and Vox Media — each of which announced similar news this week.