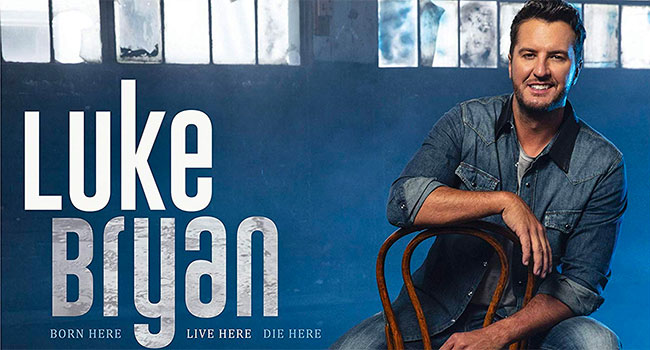 Luke Bryan has unveiled the cover and track listing of his upcoming Born Here Live Here Die Here album with first looks from Entertainment Weekly and People magazine. The album’s title track is available to fans eager to hear more new music from the April 24th project. The project is Bryan’s seventh studio album and is produced by Jeff Stevens and Jody Stevens.

“The second I heard the song ‘Born Here, Live Here, Die Here’ [written by Jameson Rodgers, Josh Thompson, Jake Mitchell] it related to me, how I grew up, how I have so many roots and so many ties to my hometown,” Bryan shares. “Being tied to your hometown is very important in country music. I fell in love with the song right away and now we have an album and a tour derived from this song. It’s pretty amazing. I’m proud of this new music and I’m really excited to get it out!”

The project includes his 23rd No. 1 single “Knockin’ Boots” and current smash “What She Wants Tonight.”

Special fan bundles are available exclusively at Bryan’s online store. A special Valentine’s Day package includes a CD copy, sticker and V-Day card. Other options include Fan Package with CD and sticker; Deluxe Package with CD, sticker and t-shirt and two different Collector’s Packages each containing an autographed guitar and special shirt, among other items. All album packages include an instant download of the tracks “Knockin’ Boots”, “What She Wants Tonight” and “Born Here Live Here Die Here” delivered via email.

No vinyl release appears to be pending as of this writing.

Bryan will support the album with his Proud To Be Right Here Tour kicking off in May. The 32 date tour will feature openers Morgan Wallen along with Caylee Hammack and Runaway June at select dates.

This Sunday, February 16th at 8 pm ET, Bryan returns to the judges table alongside Katy Perry and Lionel Richie on ABC’s American Idol as the new season premieres and they set out to discover the next American Idol.