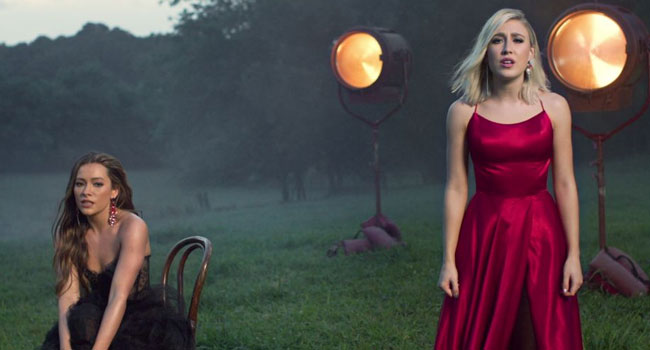 On the heels of their “achingly poignant” (Sun-Sentinel) current single “Die From A Broken Heart” mounting over 50 million streams, platinum selling duo Maddie & Tae are sharing the heart-bending official music video with a live chat and viewing on YouTube Thursday (Aug 8th). In line with the “raw, vulnerable” (The Huffington Post) track, the video’s powerful treatment was predominately written by the award-winning duo, taking fans on a crushing journey through the demise of a young couple’s relationship with Maddie and Tae’s Taylor Dye stepping into the acting chair, while Maddie Marlow sets the scene narrating with striking vocals.

“We knew that with a song like ‘Die From a Broken Heart,’ the music video needed to come from that same vulnerability and that’s exactly what we did,” Taylor Dye shares. “We went back and forth with our director Carlos Ruiz for weeks just trying to make sure we had all the tools to make this story come to life. This music video was healing for me and I hope it plays a part in someone else’s healing as well.”

“Carlos was the best director to collaborate with on this video,” adds Maddie Marlow. “He really listened to our vision and what we wanted this video to look and feel like. Carlos came up with the bones of the treatment and we filled in the details with what inspired ‘Die From a Broken Heart.’ My goal was to tell the story as honestly as possible and make people feel for either the one with her heart broken or for the best friend having to watch her go through it. Tae was so vulnerable and did an amazing job acting out her story. I’m so proud of her for going there fully, so that others can connect. Of all the videos we’ve created, ‘Die From a Broken Heart’ is the one I’m most proud of making.”

Award-winning duo Maddie & Tae are drawing praise for their new music “anchored around their stellar vocal pairings and some of the tightest harmonies on Music Row” (Rolling Stone). Recently releasing their eagerly-awaited EP One Heart To Another, serving as a snapshot of more music to come from the duo later this year, “the sound is identifiable while still representing a distinct step forward” (Billboard). Maddie & Tae first broke out in 2013 with their brilliant take down of bro-country, “Girl In A Country Song,” which took country radio by storm, skyrocketing to the top of the charts and quickly going platinum.

The duo became only the third female duo in 70 years to top the Country Airplay charts, also earning trophies from the Country Music Academy and Radio Disney Music Awards along with multiple ACM, CMA and CMT Award nominations. Receiving widespread praise from NPR, Billboard, Entertainment Weekly, The Washington Post, Glamour and others, country music’s hottest stars including Dierks Bentley, Lee Brice and Brad Paisley have welcomed Maddie & Tae on the road, with Carrie Underwood recently inviting the duo out as direct support on her 2019 The Cry Pretty Tour 360.