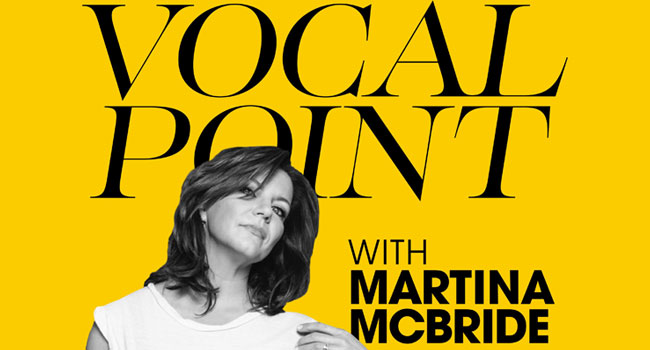 Martina McBride is launching her own podcast, Vocal Point with Martina McBride, on Friday, September 27th as part of Luminary’s fall podcast line up. The program is produced by Believe Entertainment Group, and sees the country music powerhouse and lifestyle influencer sitting down with A-List friends from across all genres including musicians, celebrity chefs, actors and anyone with a story to tell.

“I wanted to do a podcast that’s not really an interview as much as it is a conversation,” says McBride. “I hope it’s entertaining for the listeners and also that it gives a little bit of insight into the person that I’m interviewing. We talked about their life philosophy, their struggles and how they’ve overcome them. A lot of it has been so inspiring as well as entertaining.”

For the premiere episode of Vocal Point with Martina McBride, McBride sits down with longtime friend and fellow country musician, Garth Brooks, for a candid conversation on life in the limelight and how he has navigated fame and his impactful career. Other guests throughout the season include Lauren Alaina, Pam Tillis, Dustin Lynch, Rosanne Cash, Sara Evans, Don Was, Brenda Lee, Runaway June, Howie Mandel and Loretta Lynn.

Luminary offers all listeners a one month free trial of Luminary Premium, with a monthly subscription of $7.99 following the first month for U.S. subscribers. The free Luminary app is also available to download for listeners in Canada, the U.K., and Australia, also with a one-month free trial.