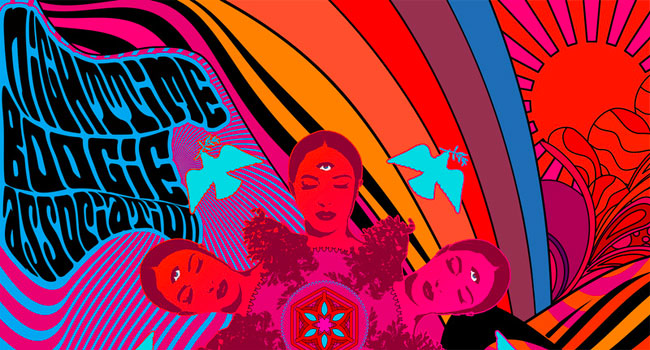 Due to the coronavirus pandemic, tour plans came to a screeching halt this year leaving a lot of time to create new projects and new music. Soundgarden and Pearl Jam drummer, Matt Cameron, and Foo Fighters drummer, Taylor Hawkins, did just that. The two songwriter/drummers created Nighttime Boogie Association, and wrote, recorded, and produced two songs – “Long In The Tooth” and “The Path We’re On.” The songs are now available as a deluxe single through their own label, Keep It Trippy Records.

“Long In The Tooth” was written by Taylor Hawkins (lyrics) and Matt Cameron (music) and features Cameron on guitar, bass, and drum machine and Hawkins on lead vocal, drum fills, percussion, and keyboards.

Matt Cameron wrote the music and lyrics for “The Path We’re On” and also plays drums, guitar and vocals. Taylor Hawkins performs the drum intro, as well as lead vocals and keyboards. The song also features Buzz Osborne on guitar and Steven McDonald on bass and from “fuzz-rock overlords,” The Melvins.

Due to lockdown orders, travel limitations, and social distancing mandates, the songs were recorded, engineered, and mixed in multiple locations across the U.S. Engineered by Toshi Kasai, John Lousteau, Nathan Yaccino, Matt Cameron, and Oliver Roman, Nighttime Boogie Association’s deluxe single was recorded at Matt’s Garage, Studio 606, Made in the Seventies, The Ballard Baitshop, and Sound of Siren. Brandon Bell mixed the songs at The Cabins Studio in Nashville and Pete Lyman mastered them at Infrasonic Sound in Los Angeles.