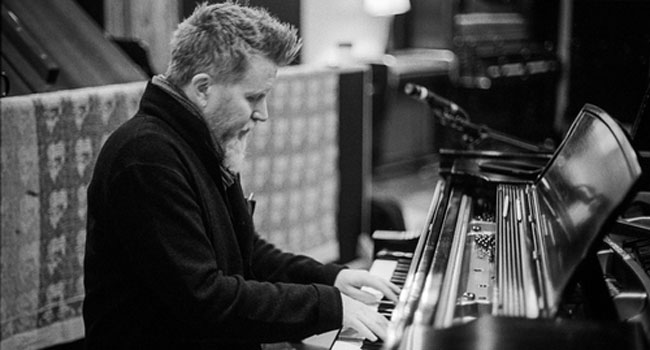 “The album Matt Rollings Mosaic was conceived after a chance meeting with Ramblin’ Jack Elliott one evening in a boat house at the end of a pier in Tomales Bay in July 2018, while I was on a break from a tour with Alison Krauss,” explains Rollings. “Jack was like an apparition from the mists and listening to him ramble about his life and music sparked something in me that led to creating this album. After our meeting, I knew I wanted to make some music with him, and he was the first artist to record with me for the record, which really is a mosaic of the influences and experiences of my musical life so far.”

“‘Lucky Old Sun’ is one of my favorite standards. I’ve always loved Louis Armstrong’s 1949 version, and have wanted to record it. When the opportunity arose to have these three icons, Willie Nelson, Lyle Lovett and Ramblin’ Jack Elliott, perform on this song with me and Jay Bellerose, it just alchemized into this loose and funky rendition. A bit later, I added my friends guitarist/producer John Levental on acoustic guitar and banjo, and saxophonist Jeff Coffin on the woodwinds, along with tuba master Joe Murphy. The acoustic lead guitar is Willie, playing Trigger.”

Most recently, Rollings released the single “Stay” featuring Alison Krauss and Vince Gill. The release was accompanied by an official music video directed by Michael Wilson featuring images from his extensive archives that capture the breadth of the human experience.

Rollings announced the album with a cover of “Accentuate The Positive,” featuring his longtime friend and collaborator of over thirty years, Lyle Lovett. Billboard spoke with Rollings about the new album and said, “Mosaic return[s] Rollings to a position of being an artist in his own right.” Last month, Rollings spoke with American Songwriter about the project and the song “Wade In The Water” featuring The War & Treaty and The Blind Boys of Alabama.

Over the past four decades, the GRAMMY-winning producer and piano virtuoso has performed on thousands of recordings across a wide swath of genres, contributing to releases from Bruce Springsteen, Eric Clapton, Johnny Cash, Kris Kristofferson, Mavis Staples, Billy Joel, Dolly Parton, The Dixie Chicks, Metallica, and Sheryl Crow among others. On top of his astonishing resume as a session player and sideman, Rollings has also written, produced, and arranged for a whole slew of icons, from Willie Nelson and Lyle Lovett to Keith Urban and Mary Chapin Carpenter, taken home the ACM Award for Pianist of the Year on ten separate occasions, and earned widespread acclaim for his 1990 solo debut, Balconies.

“I’m a piano player,” says Rollings. “I’ve made a career out of listening deeply and supporting other artist’s visions, and that’s brought a lot of joy and meaning into my life. With this record, though, it was time for me to explore my own vision.”

With Matt Rollings Mosaic, he steps into the spotlight for the first time in thirty years while inviting some of his big-name friends to lend their talents, mixing originals with timeless classics and some of the more famous songs he’s performed on over the years.

“I called this album Matt Rollings Mosaic not only because it’s a mosaic of styles and genres and artists, but because I feel like I’m a mosaic myself,” he concludes. “I love being a performer and a writer and an arranger and a producer, but so often, you’re made to feel like you have to pick just one. With this record, I got to choose them all.”