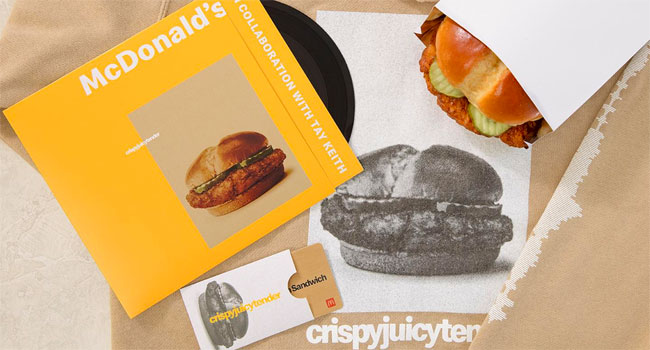 McDonald’s is launching its new Crispy Chicken Sandwich with a limited edition capsule, featuring a never-before-heard audio track created by super music producer Tay Keith on 7″ vinyl. The single was created for the restaurant’s new Crispy Chicken Sandwich, and debuts soon in its advertising campaign. Fans can hear the single first via the vinyl.

“We know fans can’t wait for our new Crispy Chicken Sandwich to hit restaurants, so we’re celebrating them and this moment with a drop like no other,” states VP of U.S. Communications, David Tovar. “We’re excited to give fans early access to this sandwich and exclusive swag they can’t get anywhere else to memorialize this great addition to our menu.”

Fans were offered early access to the sandwich on Thursday (Feb 18th), but capsules sold out within minutes. Those who secured a capsule can get the sandwich on February 23rd, one day before it’s available in restaurants nationwide. The hottest new chicken sandwich in the game features a new crispy, juicy, tender fillet made with all-white meat chicken that’s served Crispy, Spicy and Deluxe – and featuring mouthwatering ingredients like a toasted, buttered potato roll, crinkle cut pickles and our Spicy Pepper Sauce.

Fans can also pick up a limited edition hoodie that features the waveform design of Keith’s original track up one sleeve.  Hoodies are available in sizes S through XXL via CHKNDrop.com.

This is the third collaboration McDonald’s has curated with pop stars. Travis Scott and J Balvin have all dropped exclusive merch with the restaurant in recent months. However, this is the first vinyl offering.