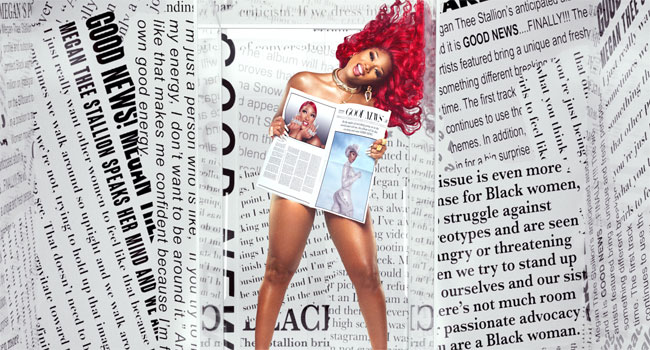 Megan Thee Stallion is here to brighten up news cycles for fans everywhere as she announces her highly anticipated debut album, Good News. The album takes its title from Megan’s ethos that in the midst of everything negative going on in the world, we all have the ability to make and become our own good news. Megan Thee Stallion’s Good News is here to inspire listeners everywhere and to bring fun back into the everyday.

The announcement of Good News follows Megan’s five BET Awards, including Hip Hop Artist Of The Year as well as an MTV VMA Award for “Savage” and an honor by TIME in the TIME100, its annual list of the 100 most influential people in the world. Megan Thee Stallion is also set to perform at the 2020 American Music Awards, where she will be debuting a brand new track.

With her killer flow, incendiary lyricism and jaw-dropping visuals, Megan Thee Stallion was catapulted into stardom with the release of her breakout mixtape, Fever, where she introduced the world to “Hot Girl Summer” – her ubiquitous catchphrase-turned-platinum single featuring Nicki Minaj and Ty Dolla $ign. By taking over summer 2019 with her growing fanbase of hotties, Megan The Stallion’s journey as a multi-faceted star, record breaker, philanthropist, and ever evolving cultural icon took off with an extraordinary start.

Now in 2020, it has indisputably been the year of Houston Hottie. Beginning with the release of her most successful project so far, “Suga,” Megan garnered over 1.54 billion global streams on the project to date, also spawning “Savage” – summer 2020’s most recognizable smash hit and the origin of the year’s biggest TikTok dance craze, the #SavageChallenge. The track also gave Megan Thee Stallion her first No. 1 hit on the Billboard Hot 200 alongside an irresistible remix with the one and only, Beyoncé.

Most recently, Megan achieved her second global No. 1 of the year; a collaboration with female rap powerhouse Cardi B,
“WAP” in August 2020. Listed as the highest selling single in over a year, as well as the highest streaming debut week for any track since records began, “WAP” drew over 93 million streams in its first seven days and is already certified platinum. This is in addition to the track igniting conversation online, with Megan’s cultural currency and ability to dominate the zeitgeist at an all time high.