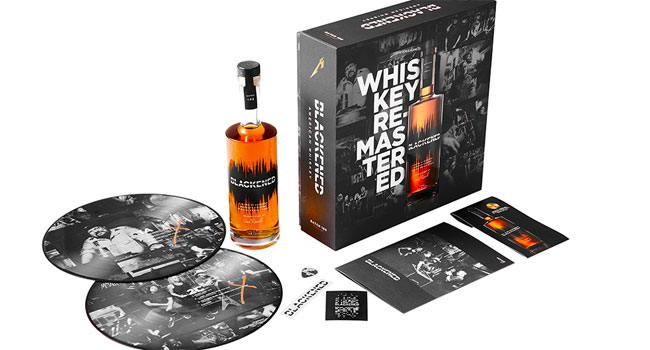 Dietrich approached the playlist for Batch 100 on both a technical and deeply personal level. “I wanted to add live versions to show the connection of the fans to the music, to the band, and to the whiskey,” states Dietrich. “‘Nothing Else Matters’ is an acoustic version from the band’s first Helping Hands Benefit Show that James (Hetfield – Metallica co-founder, guitarist and vocalist) verbally dedicated to Blackened’s founding Master Distiller, Dave Pickerell just days after his passing. ‘One’ is a song we listened to over and over again when I was deployed to Somalia during Operation Restore Hope and Operation Continue Hope. It was one of our anthems, and the energy of the crowd in this live version is incredible.”

With a professional background in both distilling and music, Dietrich brings his own unique talents and skills to the role with Batch 100. “I am honored to have the opportunity to be able to create a whiskey and pour so much of myself personally into the process,” says Dietrich. “Music and distilling are two things I have dedicated my life to, and I do not take for granted how rare it is to be able to blend, literally, these worlds.”

“When I look at Rob’s playlist, I love the selections. I love the variety and I love that he’s gone for two deeper live tracks from the Damaged Justice Tour,” says Metallica’s Lars Ulrich. “I love seeing both the Binge & Purge and Through the Never eras represented. And he even tapped the Helping Hands album, so it’s clear he is not a part-timer!”

This box is also the only place you can get the first issue of the Blackened Zine. Blackened’s take on an old school music zine features background on the collaboration between Metallica and Blackened’s Master Distillers, first the late Dave Pickerell and now Rob Dietrich; insight into the whiskey making process behind Blackened from flavor profiles to Blackened’s proprietary Black Noise “sonic enhancement” technology; a note from Lars Ulrich introducing Rob Dietrich’s playlist; track list featured on the Batch 100 playlist, with commentary from Rob Dietrich; and a Blackened cocktail recipe and tips from featured bartender Bad Birdy.

Batch 100 will only be available as part of this box set, which can be purchased online at BlackenedWhiskey.com. Supplies are limited. Must be 21 years or older. For fans in regions where sale is prohibited, Metallica.com is hosting a contest for the collectible contents of the box set, excluding the whiskey.

Blackened, a blend of North America’s finest bourbons and ryes, was launched by Metallica and the legendary Master Distiller Dave Pickerell with Batch 81 in 2018 to honor the year the band was founded. In June of 2019, Master Distiller & Blender Rob Dietrich joined the fold after the passing of Pickerell, overseeing the sourcing, blending and cask finishing of barrels for each batch.