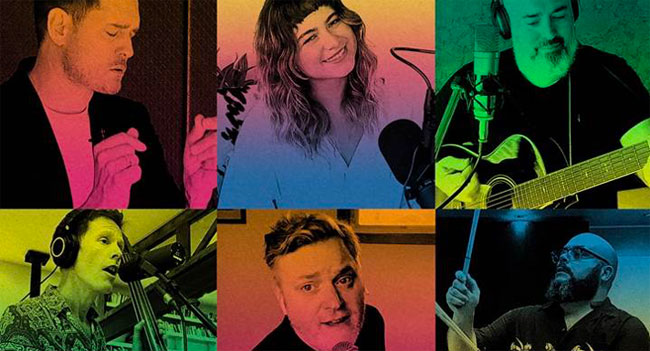 GRAMMY Award-winning singer Michael Bublé has released an all-star collaboration of “Gotta Be Patient” with Barenaked Ladies and Spanish star Sofia Reyes. Bublé will be donating his proceeds to the Red Cross in Canada and Argentina. Proceeds for Barenaked Ladies will go to Cultural Survival which provides indigenous communities rights and cultures worldwide. Reyes will be donating her proceeds to various Latin charities.

“Gotta Be Patient” was written by Rai Benet, Guillem Boltó, and Klaus Stroink of Barcelona-based Stay Homas. The group records a new song every day from their rooftop in Barcelona during the quarantine.

Bublé heard the song while self-quarantined with his family in Vancouver. He loved it and immediately shared it on his Facebook page. The response from fans was overwhelming and it inspired him to record it with a little help from long-time friends Barenaked Ladies and Warner-Latino Mexican artist Sofia Reyes.

“I couldn’t get the song out of my head and the more I thought about it and despite the difficulties of putting it together with everyone isolating at home, I went for it,” Bublé shares of the track. “I reached out to Barenaked Ladies and Sofia who agreed to come on board. The bilingual aspect along with the song’s message was especially appealing since we are all in this together. I’m reminded of that while going back and forth in English and Spanish with my kids daily. Seems like one big language.”

“What a pleasure to collaborate with Michael and Sofia. It all came together so quickly and just captured what can be a silver lining in these difficult times. Music finds a way!” comments Barenaked Ladies vocalist Ed Robertson.

The song is available at all digital outlets.