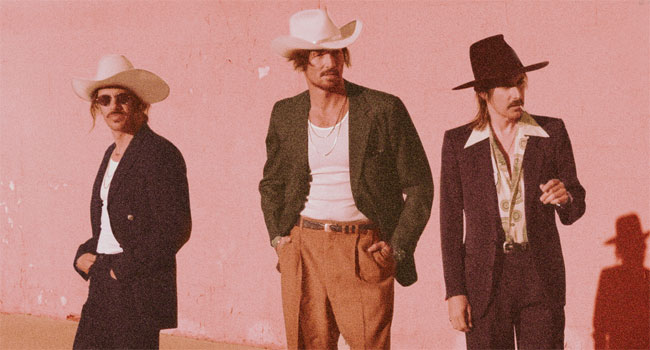 Grammy-nominated trio Midland have announced their fall headlining tour with special guest Hailey Whitters that kicks off October 7th in Phoenix, AZ and goes through the end of the year. Tickets for The Last Resort Tour go on sale May 7th at 10 am local time via MidlandOfficial.com. Spotify fans in participating markets will receive a special pre-sale code via email Tuesday, May 4th to get early access to tickets. Separately, those who have signed up for Midland’s mailing list will be emailed a promo code Wednesday, May 5th for early access.

Through it all, Midland has continued to find ways to connect with fans until they could get back on the road. Recently releasing Midland: The Sonic Ranch documentary across ViacomCBS platforms, including CMT and MTV Live, the band gave fans an insight into their beginnings which features never-before-seen footage and original recordings that transformed three friends into one of country music’s most dynamic trios. The documentary film and accompanying album tells the origin story of the band, five years prior to landing on country radio with 2017’s platinum-certified and double Grammy-nominated “Drinkin’ Problem” (Big Machine Records).

Midland has grown from bar band to an in-demand headliner spending the past four years on the road selling out headline tours from coast to coast as well as getting to support some of Country music’s biggest stars like George Strait, Garth Brooks, Tim McGraw and Little Big Town. The band just wrapped their Back To The Minors Tour playing outdoor shows across Texas at baseball stadiums as well as three exclusive nights at Fort Worth’s legendary honky-tonk Billy Bob’s that was livestreamed to fans that could not attend in person.

The Iowa-born, Nashville-based rising country star Hailey Whitters released her breakthrough album The Dream in 2020, which topped many year-end lists as one of the year’s best country albums. In February of this year, Whitters released the deluxe edition Living The Dream, calling upon her close friends and collaborators Brent Cobb, Jordan Davis, Hillary Lindsey, Little Big Town, Lori McKenna and Trisha Yearwood to contribute vocals to five fresh new tracks. In addition to supporting Midland on The Last Resort tour this fall, Whitters will play shows supporting Luke Combs and Jon Pardi, and will perform at the Pilgrimage Music Festival.