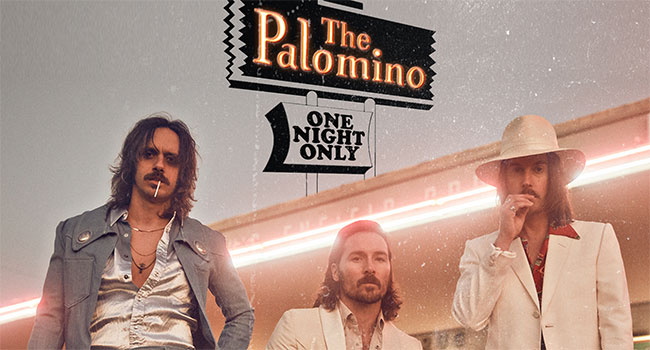 Never a band to miss a chance to play, let alone barnstorm one of America’s most historic honky tonks, Midland returns the Palomino to its original purpose for one night only. On October 15th, ACM award winners and double Grammy nominees Mark Wystrach, Cameron Duddy, and Jess Carson will decamp at the once legendary watering hole that’s headlined Merle Haggard, Charlie Rich, Jerry Lee Lewis, Emmylou Harris, the Pretenders and Commander Cody, followed by Lone Justice, the Blasters and kd lang, before serving as a launching pad for Lucinda Williams, Jim Lauderdale, Buddy Miller and Dwight Yoakam.

Let It Roll (Big Machine Records), Midland’s No. 1 Billboard Top Country Album debut and second critically lauded project, was recorded in four different cities over the course of their relentless touring schedule. The New York Times cited their “retro country elegance,” NPR acknowledged Midland “Evolves Its Vintage Sound” and Esquire proclaimed, “as well-worn as the barstool its protagonist refuses to abandon — think warm, Dwight Yoakam-esque country and swirling, Laurel Canyon folk” about the trio who seeks to connect to the source for this very special one-time only show. Limited tickets are now available at MidlandOfficial.com.

“We are always looking to get to the roots,” says bassist/vocalist Duddy, “where the music seeps into every crack or corner, you never know what you’re gonna feel. If the walls of the Palomino could talk, we’d probably camp out there. As it is, we’re stoked to play on the stage where so many influences, heroes and hardcore punks have broken ground. For us, it’s harvesting everything we love – and bringing the Palomino back to what it’s known for.”

Given their music is built on the unapologetic nature of classic country’s embrace of grown-up themes, expect plenty of drinking songs, cheating songs and seduction songs. For fans of Cliffie Stone’s Talent Night or Ronnie Mack’s Barn Dance, expect the same intensity and reverence for the post-Urban Cowboy country that’s become Midland’s signature. Whether the rockabilly-leaning “Mr. Lonely,” the sweeping “Cheatin’ By The Rules” or the rollicking “Playboys,” Midland seeks to stir the crowd.

“Places like this are disappearing,” explains lead singer Wystrach, “so you want to remember, to grab the moments while you still can. We live for hardcore honky-tonks, and to bring that back to a place that’s seen Gary Stewart, Freddy Fender, punk bands, Rick Nelson and Asleep at the Wheel, it’s an honor to connect – even for one night – to that kind of past.”

With Stagecoach Music Festival, Dos Equis, the Academy of Country Music and Tito’s Handmade Vodka coming to the table as sponsors, as well as touring bible Pollstar, Midland at the Palomino is a gathering of tribes, vibes and musical aficionados’ intent on having one last throwdown at the venue which would have commemorated 70 years of honky tonk heritage this year.

The Palomino’s original iconic neon sign that once stood on Lankershim Boulevard will be brought out of the Valley Relics Museum and on display for this special night.

“We believe in hanging onto the past,” says Carson. “Because there’s an awful lot of wild, an awful lot of great and an awful lot of stuff you can’t live down. We’re hoping to make a little bit of all of that happen when they plug in the neon and open the doors for this! The idea we can bring an icon where so many of our heroes have played back – even for a night – is everything we try to do. C’mon out!”