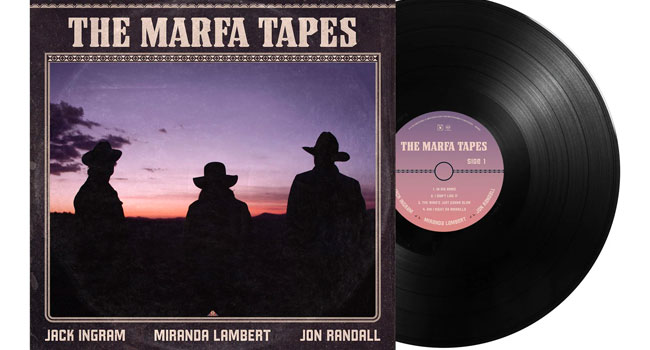 The Marfa Tapes available May 7th

Miranda Lambert is teaming up with Jack Ingram and Jon Randall for The Marfa Tapes, available May 7th. The singer revealed the news on social media on Thursday (March 4th), stating the project stems from isolating to the small desert West Texas town of Marfa.

“They’re raw. You can hear the wind blowing, the cows mooing… We wanted you to feel like you were right there with us, sitting around the campfire, escaping the world, disappearing into the music,” she writes.

Barely a dot on the map, Marfa is an eccentric outpost in the midst of a vast expanse of nothingness, the perfect place to lose – or find – yourself. For Lambert, Randall, and Ingram, it’s both. Over the past several years, the desolate location has become a songwriting haven for the trio, yielding both massive hits and profound personal growth. When they returned for five days this past November though, they came not to write, but to record, capturing a captivating new album inspired by the stark beauty of west Texas and the deep, lasting bonds the three have forged there. Recorded raw and loose with just a pair of microphones and an acoustic guitar, The Marfa Tapes is a stunning work of audio verité; an intimate, unadorned snapshot of a moment in time fueled by love, trust, and friendship.

“There’s no TV, no radio, nothing to do out there but pour a cocktail, sit around the campfire, and talk,” continues Randall. “Eventually, that just inevitably leads to songs. There’s no pressure to write, but most of the time, the three of us can’t seem to help ourselves.”

The trio recorded much of the album outdoors, inviting the ambient sounds of the desert to seep into their live, bare bones performances, and the atmosphere is utterly transportive. While a couple of the tracks may already be familiar to listeners – ACM Song of the Year “Tin Man” as well as fan favorite “Tequila Does” – the vast majority of these songs have never been heard outside of Marfa. The result is a rare glimpse inside the creative process of three of the genre’s most accomplished writers and performers; a candid, unvarnished look at Lambert, Randall, and Ingram’s undeniable chemistry in its purest, most honest form.

“There’s something singular that happens in that moment of collaboration and creation, something you can never really recreate in the studio,” adds Ingram. “Our hope with this album was to share a little bit of that magic with people.”

The album’s lead song, “In His Arms” will be available at midnight ET tonight.

The set will be available on vinyl and digital outlets. It’s unclear if a CD release will be issued, as of press time.

Lambert teased the project on Wednesday (March 3rd), sharing, “Every time I need an escape, I go to Marfa, TX. Jack Ingram, and Jon Randall come. We recharge. We get inspired by its beauty. We write songs. Tin Man was the 1st one we shared with you. Tequila Does was the 2nd. In between, we’ve written 13 more. And it’s about time to start sharing them with y’all…”

It was also announced this week via the Nashville Business Journal that Lambert will be the first female country singer to open a bar on Nashville’s Broadway. Miranda Lambert’s Casa Rosa will be located at 308 Broadway spanning 17,400 square feet of space with a mezzanine. The building is currently being renovated for an unknown opening date. The deal is with TC Restaurant Group, the company behind Jason Aldean’s Kitchen and Rooftop Bar, Luke Bryan’s Luke’s 32 Bridge Food + Drink and Florida Georgia Line’s FGL House, among others.

“In true Miranda Lambert fashion, the two-time GRAMMY Award winning artist will make history in 2021 by partnering with TC Restaurant Group to become the first female country star to have a bar and restaurant on Broadway in Nashville, Tennessee,” TC Restaurant Group tells the Business Journal.

More details about the restaurant and bar are expected soon.