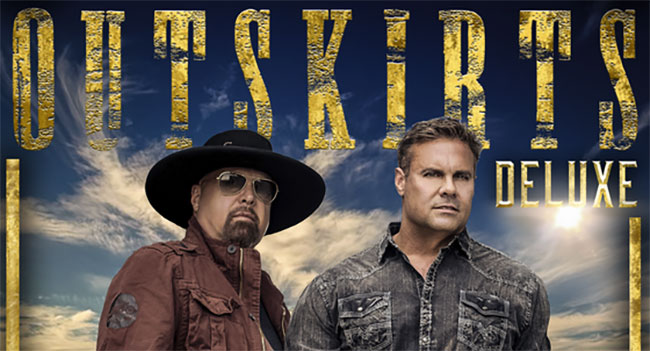 Montgomery Gentry will release Outskirts Deluxe on November 1st, an updated version of the digital EP issued June 14th via Average Joes Entertainment. Outskirts Deluxe will feature all seven of the original songs released on the EP plus four additional rare tracks; Ronnie Milsap’s “Shakey Ground” f/Eddie Montgomery, “Roll With Me,” “Good Ole Boys,” and “Didn’t I.” A live performance video of the “athemic” title track culled from fan-submitted footage premieres on PopCulture.com. Outskirts Deluxe is available at Walmart, Amazon and all digital retailers.

“Montgomery Gentry revel in life’s many simple pleasures in ‘Outskirts’,” Rolling Stone Country commented on the title track. The duo added the song into their live set in the spring of 2017 to give audiences a taste of what was to come. The “Outskirts” music video represents fan-submitted footage of the last live concert performances of Troy Gentry and Eddie Montgomery.

Featured on the deluxe edition are the original seven songs contained on the EP including two covers; Eddie Montgomery’s version of Merle Haggard’s “What Am I Going To Do With The Rest Of My Life,” and Troy Gentry’s rendition of “You’ll Never Leave Harlan Alive.” Guitar great, Steve Vai, guests on the swampy, “King of the World.” Two additional songs in the collection were re-recorded by the duo in 2017; the dutiful, “Didn’t I” and “Shakey Ground,” a duet with Ronnie Milsap. Rounding out the album are “Roll With Me” a nod to slowing down and living life, and the Dukes of Hazzard theme song, “Good Ole Boys.”

With 20 plus charted singles, the Kentucky-born duo has earned CMA, ACM, and GRAMMY awards and nominations with undeniable blue collar anthems like “Hell Yeah,” “My Town,” and “Hillbilly Shoes.” They’ve notched five No. 1 singles, “If You Ever Stop Loving Me,” “Something To Be Proud Of,” “Lucky Man,” “Back When I Knew It All” and “Roll With Me.” They were inducted as Grand Ole Opry members in 2009 and were inducted into the Kentucky Music Hall of Fame in 2015. Montgomery has continued to tour under the Montgomery Gentry banner following partner Troy Gentry’s tragic death in September 2017.