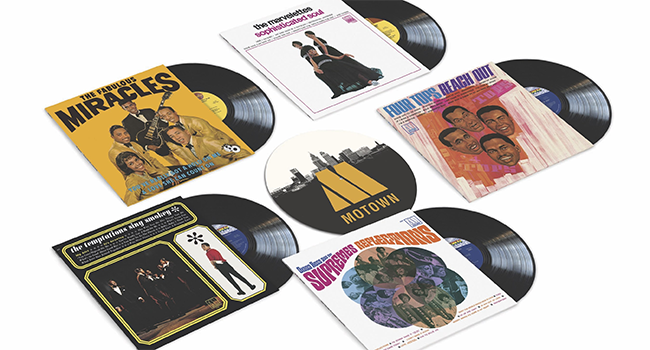 Motown’s 60th anniversary celebration continues with the announcement of a special, limited edition “Motown In Mono” vinyl series, featuring The Four Tops’ Reach Out (1967), The Marvelettes’ Sophisticated Soul (1968), The Miracles’ You’ve Really Got A Hold On Me (1963), Diana Ross & The Supremes’ Reflections (1968), and The Temptations’ The Temptations Sing Smokey (1965). The albums will be released on November 8th via Motown/UME. They are available as a collectible five LP set with a custom turntable slipmat, exclusively from The Sound of Vinyl. All five albums are newly remastered from their original analog master tapes by Kevin Gray at Cohearent Audio, pressed on audiophile-quality 180-gram vinyl, and packaged in deluxe Stoughton tip-on jackets.

“There was a big reason why mono was a great thing for Motown — the emphasis then was radio,” explains remastering engineer Kevin Gray. “They did special mixes in mono, intended for radio, and those are the ones we grew up listening to.”

He continues, “I’m approaching these Motown albums by trying to keep everything balanced within the same framework. Within an album, I try to find a level that is representative of what the album was supposed to be, and then I match everything as closely as I can to that with EQ. I certainly don’t find any need to add further compression. The tapes have held up well. I’m always pleased when that happens. It’s been very rewarding to work on them, and they sounded very, very good.”

Sophisticated Soul has never before been commercially released in mono, and Reflections was issued in mono in the UK only. The mono LPs for You’ve Really Got A Hold On Me (also generally known, from the album’s cover art, as The Fabulous Miracles), Reach Out, The Temptations Sing Smokey are long out-of-print and rare.