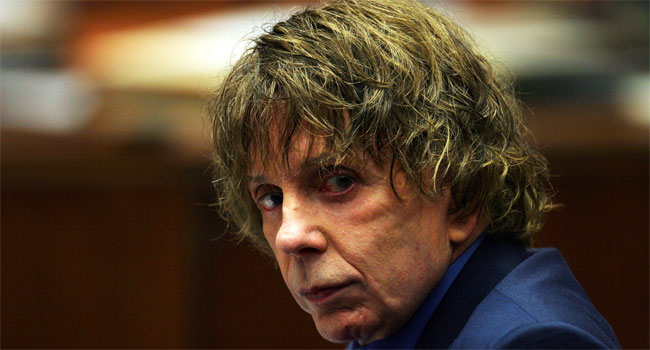 TMZ claims their sources say Spector actually died from COVID-19 complications after being hospitalized in December. They report that Spector was hospitalized for four weeks, but was well enough to return to prison, but symptoms relapsed and Spector was rushed back to the hospital for breathing problems where he died.

Spector was named a visionary for creating “The Wall of Sound” that involved overdubbing instruments, vocals and sound affects to forge a new path for recording pop records. The new method was popularized in hits such as “Da Doo Ron Ron,” “Be My Baby” and “He’s a Rebel,” throughout the 1960s. Bruce Springsteen and Brian Wilson are among the artists who have attempted to replicate that sound throughout their careers.

Throughout his career, Spector produced Ike and Tina Turner’s “River Deep, Mountain High,” The Beatles’ final album Let It Be, John Lennon’s “Imagine” and “Instant Karma,” George Harrison’s All Things Must Pass, and others. McCartney, who oversees all of The Beatles remastering and reissues, later had Spector’s contributions removed from Let It Be reissues.

In 2009, Spector was charged with Clarkson’s murder after it took prosecutors a year to to file charges due to the mystery surrounding the case. According to the Associated Press, Spector told friends Clarkson shot herself in the early morning hours of February 3, 2003. However, witnesses report that he came out of his Hollywood home holding a gun with blood on his hands, stating, “I think I killed somebody.”

Reports of Spector waving guns at artists in the studio and threatening women would come back to haunt him after the Clarkson trial in 2009.

He lashed out at authorities during his indictment, saying, “The actions of the Hitler-like DA and his storm trooper henchmen are reprehensible, unconscionable and despicable.”