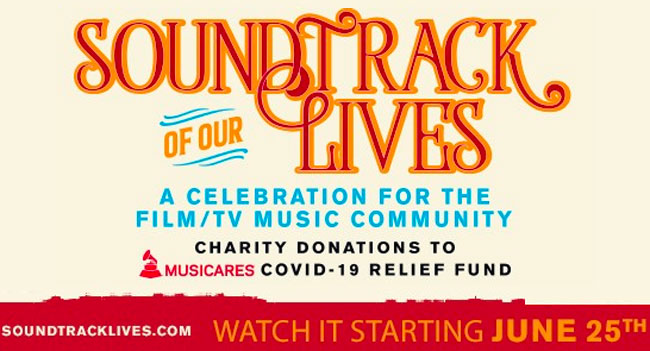 MusiCares has announced the Soundtrack of Our Lives: A Celebration for the Film and TV Music Community for COVID-19 benefit livestream concert set for June 25th at noon PT. Stars, singers, composers, songwriters, and others will celebrate glorious moments of film and TV music with great heart and humor in the well-paced, pre-recorded and edited one hour special.

Special performances include a musical number by Levi, LuPone, Newell, Yankovic, actor Peter Gallagher and Harvey Fierstein; a song from The Nightmare Before Christmas featuring a reunion of Elfman, O’Hara, Paul Reubens and Ken Page; Menken and his daughter Anna Rose performing “A Whole New World” from Aladdin; and Paul Williams will sing his classic “The Rainbow Connection” from The Muppet Movie with special guests, Variety reports.

“Thousands of music professionals and creators are struggling during this pandemic and remain in desperate need of assistance,” shares Debbie Carroll, Vice President Health and Human Services MusiCares who also says messages of hope, solidarity and encouragement will be delivered throughout the broadcast. “The continued support from the music community during these turbulent times has been heartwarming and inspiring. The power of music unites us all and gives us hope for better days ahead.”

Donations will be accepted during the livestream which will benefit The MusiCares COVID-19 Relief Fund, which was established by the Recording Academy and MusiCares in March to provide monetary support to music people in need due to the cancellation of income-generating music events and other industry work opportunities. To establish the fund, both the Recording Academy and MusiCares have contributed an initial donation of $1 million each, totaling $2 million, which many artists and other organizations contributing. From hotel and bar gigs to major music festivals, COVID-19 is deeply impacting live music events, and the creative community behind it all.