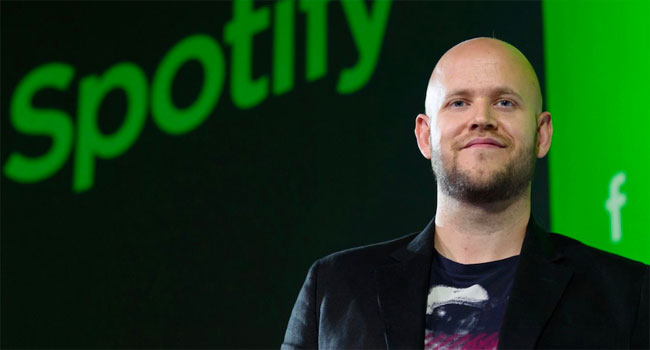 Mike Portnoy, Sebastian Bach and Dee Snider are among the artists speaking out

Many musicians have some choice words for Spotify Technology SA Chief Executive Daniel Ek who sparked controversy last week after stating artists have to work harder during the digital age. In an interview with Music Ally, Ek, who founded the largest streaming service in the world with 170 million active users, says artists have to release music more often if they want to survive during the streaming era.

“It’s quite interesting that while the overall pie is growing, and more and more people can partake in that pie, we tend to focus on a very limited set of artists,” he says of the streaming royalties many artists don’t feel compensated enough.

“Even today on our marketplace, there’s literally millions and millions of artists. What tends to be reported are the people that are unhappy, but we very rarely see anyone who’s talking about… In the entire existence [of Spotify] I don’t think I’ve ever seen a single artist saying ‘I’m happy with all the money I’m getting from streaming.

“Stating that publicly. In private they have done that many times, but in public they have no incentive to do it. But unequivocally, from the data, there are more and more artists that are able to live off streaming income in itself.

“There is a narrative fallacy here, combined with the fact that, obviously, some artists that used to do well in the past may not do well in this future landscape, where you can’t record music once every three to four years and think that’s going to be enough.

“The artists today that are making it realize that it’s about creating a continuous engagement with their fans. It is about putting the work in, about the storytelling around the album, and about keeping a continuous dialogue with your fans.”

Drummers Mike Portnoy and Todd Sucherman, Twisted Sister frontman Dee Snider and Sebastian Bach are among the many artists who have spoken strongly against Ek. They claim that it’s hard enough to earn money from streaming as it is, but with touring on pause due to COVID-19, these comments are a slap in the face.

Portnoy, who is known for juggling multiple bands, accuses Ek of “stealing and giving away” musicians’ work while artists themselves make very little profit from their art.

“What a greedy little bitch…it’s bad enough that he’s worth BILLIONS based on stealing and giving away other musician’s music…but now he’s suggesting we make MORE music for HIM to make more money!!!” Portnoy exclaims. “For the record, I have 8 full album releases in 2020…and will make absolute PEANUTS on them (if anything at all…) So his theory of artists needing to make MORE music to succeed is shit! F-this guy and F-Spotify🖕Support THE ARTISTS DIRECTLY if you want them to be able to continue to make music…🤬 #fuckspotify. ….the money I’ll make ALL YEAR from Spotify for those 8 albums *might* be able to buy my family dinner out for ONE night.”

Sucherman echos Portnoy’s sentiments, but without the suggestive words.

“We should make more music? OK, then everyone out there— please support artists directly,” he writes. “Go to their websites and buy the music. Or continue to give money to this guy who has made 4.5 Billion creating nothing. No arguments in this thread unless you’ve received a payment from Spotify for a fraction of one cent like I have. Then and only then are you qualified to chime in. I know streaming is convenient, but you are killing us when we are down and unable to tour if you support this man’s platform.”

Snider says churning out music at a faster pace isn’t the answer.

“While you (the listener) benefit & enjoy spotify, it’s part of what’s killing a major income stream for artist/creators,” he shares. “The amount of artists ‘rich enough’ to withstand this loss are about .0001%. Daniel Ek’s solution is for us to write & record more on our dime?! Fuck him!”

Bach says, “When this guy puts out an album himself I will listen to him tell me about my albums.”

CNBC suggests artists earn between $0.006 to $0.0084 per stream to the copyright holder, which is typically the record label as most artists don’t hold the copyrights or publishing to their music. However, some data estimates that number to be even lower at $0.00437 per play. That translates to $4.37 per one thousand streams. Google, Inc’s YouTube pays even less at $0.00069 per view. Spotify pays 70% of its revenue to the copyright holders.

Many other artists and labels have had royalty disputes with Spotify over the past decade. In 2014, Big Machine Label Group pulled Taylor Swift’s entire catalog for a period of time over their shrewd practices. In 2015, Victory Records pulled its entire artist catalog as a result of Spotify not properly paying publishing revenues due to Victory Records’ artists in blatant violation of US Copyright laws.

Def Leppard held out putting its music on Spotify until 2018 due to contract disputes with its former label, Universal Music Group, which owns all of its original recordings. In 2015, guitarist Phil Collen slammed the service, comparing it to Napster’s early years and “getting ripped off.”

Jason Aldean, Justin Moore, Brantley Gilbert, Garth Brooks, Prince, AC/DC, Bob Seger and Tool are among the artists who have pulled or hadn’t allowed their music to be streamed on Spotify for a certain period of time. Brooks finally embraced digital music in 2014 with his own Ghost Tunes service that folded into Amazon Music which remains his sole digital partner.

(1 of 2) What a greedy little bitch…it’s bad enough that he’s worth BILLIONS based on stealing and giving away other musician’s music…but now he’s suggesting we need to make MORE music for HIM to make more money!!! F-@Spotify and F-@eldsjal 🖕🤬https://t.co/gMCs2lNAPu

While you (the listener) benefit & enjoy spotify, it's part of what's killing a major income stream for artist/creators. The amount of artists "rich enough" to withstand this loss are about .0001%. Daniel Ek's solution is for us to write & record more on our dime?! Fuck him! https://t.co/IpPy7QCQWB

When this guy puts out an album himself I will listen to him tell me about my albums https://t.co/wveGKXTIEk