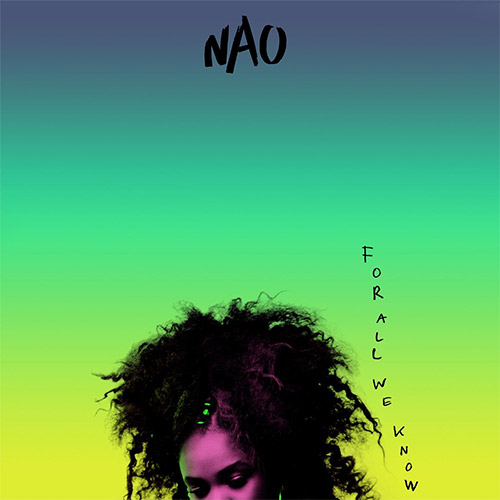 NAO’s debut album For All We Know will be released on July 29th on CD and LP via Little Tokyo Recordings/RCA Records and is set to be one of the defining records of 2016.

Her emergence as one of the most adored new singers of the year has been as fluid and elegant as one of her vocal phrases. Now she has delivered her highly anticipated debut For All We Know, a transcendent set of 18 songs. Woozy, spacey funk, shot through with her effortless breath-taking toplines, part neo-soul, part UK bass, part funk rock – all at a sensual, stepping R&B pace.

The record features fan favorites “Girlfriend,” “Inhale Exhale,” “Bad Blood” and “Fool To Love” as well as incredible unheard tracks like “Trophy” – where NAO collaborates with A.K. Paul again – and “Get To Know Ya” co-produced by XL Recordings’ Jungle. Other co-producers (NAO is credited as producer on 17 of the 18 tracks) include her good friends John Calvert (“In The Morning,” “Blue Wine,” “We Don’t Give A”), GRADES (“Bad Blood,” “Fool To Love,” “Inhale Exhale,” “Girlfriend”) and LOXE (“Adore You,” “Give Me A Little”).

NAO grew up in South Woodford, East London, listening to gospel in her local Evangelical church, her brother’s jungle UK garage and her sister’s 90s and 00s R&B – going on to study at the prestigious Guildhall School of Music and Drama. She starting writing songs in her mid-twenties after a few years of teaching school kids to sing and doing backing vocal gigs for the likes of Pulp and Kwabs.

Inspired by Little Dragon, the ideas and words flowed, and she soon began working on her own songs, resulting in her 2014 debut EP, So Good. The EP’s title track, made with A.K. Paul, whizzed around the world accumulating millions of plays on Soundcloud. NAO’s 2015 follow-up EP, February 15th, contained the single “Zillionaire” which was featured in a Samsung Galaxy commercial. By January 2016 she placed third in the high-profile BBC Sound Poll and her incredible year continues with a recent performance on Later…with Jools Holland, the cover of The Guardian and rave reviews from Fader, Essence, Pitchfork, Entertainment Weekly, and more.

For All We Know is the record of a one-of-a-kind artist destined for greatness. A record you can dip your head into for a 360-degree spectrum of kaleidoscopic digi-funk.

NAO has announced her return to North America as well as her biggest UK tour to date. The tour kicks off on September 14th at Brooklyn, NY’s Music Hall of Williamsburg and culminates into what will be an incredible night at the Knust in Hamburg, Germany on November 16th. Prior to the tour, NAO will also be performing at several festivals including Oya Festival in Oslo, Norway.