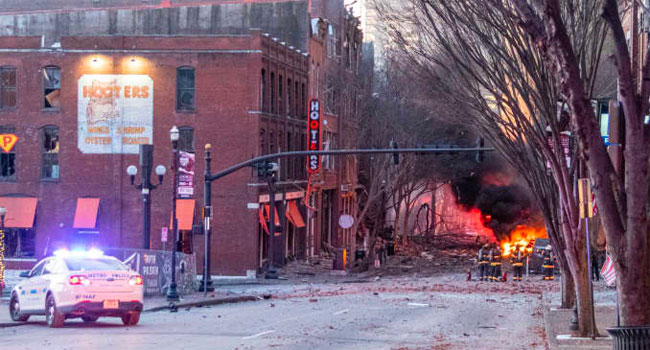 Quinn was named a person of interest

Anthony Quinn Warner of Antioch, TN has been identified as the bomber in the Christmas morning explosion that injured three people in downtown Nashville. Federal and state officials have ID’d the 63 year old after investigators matched DNA found at explosion site on 2nd Ave N, outside of the AT&T building.

Quinn was named a person of interest in the bombing and investigators searched his property on Saturday (Dec 26th). It is believed that Quinn may have targeted AT&T communication lines after it was learned he was paranoid about the use of 5G technology being used for spying purposes. However, no motive has been determined as of press time.

Warner parked his RV at 166 2nd Ave N where he fired off a recording alerting authorities and patrons that the RV was about to explode. Police were responding to a call of shots fired a block away from Broadway at around 5:30 am CT when they spotted the suspicious RV and called the hazardous devices unit. The vehicle exploded when the bomb squad responded to the area.

Officers on scene saved lives as they began to evacuate residents in the multi-use buildings on 2nd Ave. The explosion sent three people to a nearby hospital with non-life threatening injuries with one officer reportedly losing his hearing.

The large explosion was felt within 40 miles from the explosion site across Davidson County.

Country stars react about the bombing on social media.

Our house shook here in Nashville. Following the info on socials and the news but just praying nobody was hurt. Seems like it was an explosion of some sort downtown. Fucking 2020 😔

Trying to find the words….but this is a tough one.  Yesterday, on Christmas Morning, the world watched as Nashville was hit by another tragedy.  It’s been a year….but we will rise again. pic.twitter.com/czrtTTuwzb

Merry Christmas everyone! And a huge thank you to all the brave first responders in Nashville this morning. 🙏🏻❤️

My heart is with all of my fellow Nashvillians that have been affected by this… especially on Christmas… pic.twitter.com/gtPazVF4n9

Sending all my love to Nashville this morning. These videos are absolutely terrifying. Such a horrific act, especially on Christmas morning. 💔

This is my personal Thank you ⁦@MNPDNashville⁩ for keeping watch over #Nashville #BACKTHEBLUE #NashvilleExplosion pic.twitter.com/wvCpzRDnSq