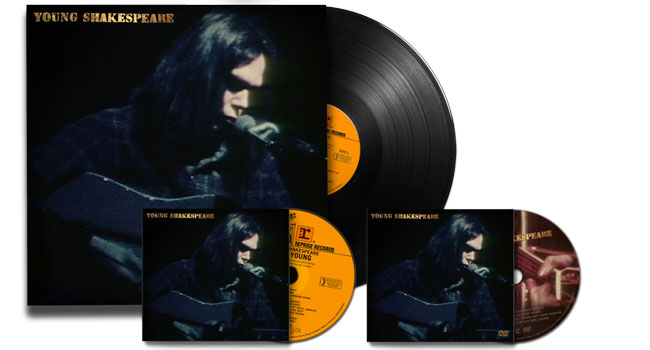 Neil Young is digging deep into his archives to release a show that is his earliest known performance. Young Shakespeare arrives on LP, DVD and CD, plus a numbered deluxe boxed edition that includes all three formats on March 26th via Reprise Records.Those who purchase the CD, LP or box set from the NYA Greedy Hand Store will also receive free hi-res digital audio downloads from the Xstream Store at Neil Young Archives.

Just two months after the release of his seminal After the Gold Rush, Young sat down for a performance at The Shakespeare Theater on January 22, 1971. The Stratford, CT show captures the artist stripped down to the bare essentials — acoustic guitar, piano, and harmonica.

The concert was recorded for presentation on German TV later that year but was not publicly available until now. The original 50 year-old analog tapes have been lovingly restored, making available early acoustic recordings of two After the Gold Rush songs, early Harvest tunes, and beloved favorites such as “Ohio,” “Cowgirl in the Sand,” “Helpless,” “Down by the River,” and “Sugar Mountain.”

Fans who pre-order will receive “Tell Me Why” instantly with “Down By The River” emailed on March 10th.