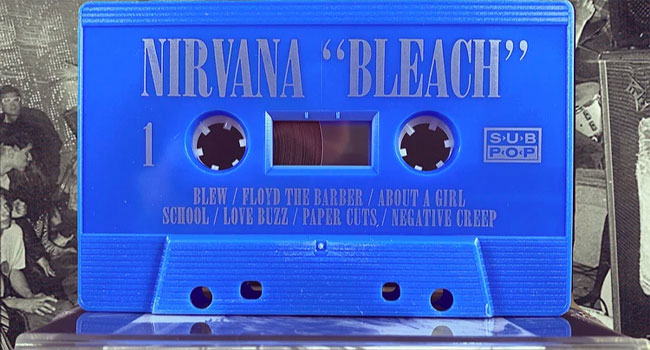 Nirvana’s debut Bleach is getting a limited edition blue cassette reissue on March 22nd via Tape Head City. Nirvana Bleach – The “BLEW” edition is limited to 1989 copies pressed on cobalt blue tape. It’s named after the album’s opening track “Blew,”  and sold out within minutes of the pre-orders going live.

Bleach was released on June 15, 1989, by Sub Pop records. “Blew” was one of the few songs Nirvana would continue to play on tour, and was the second to last song the grunge trio ever played at their final show March 1, 1994.

The Bleach version of “Blew” was accidentally recorded one step lower than the band had intended, which contributed to what Nirvana biographer Michael Azerrad called its “extraordinarily heavy sound.” Not realizing that they had already tuned to their favored drop D tuning, the band tuned further down to drop C on the first day of the sessions and recorded several songs in that tuning. As bassist Krist Novoselic recalled in a 2009 Seattle Times article, “we came back the next day and decided the idea wasn’t so hot, and we recorded over most of it with things tuned back up a little. In fact, ‘Blew,’ with that growly bass, is the only survivor of that experiment.” Novoselic also said that “Blew” was perhaps his favorite song on Bleach “because it has a groove, and again, it’s the sole survivor of the Doom Pop experiment.

A “Love Buzz” red edition was previously released and limited to 500 copies. That also sold out.