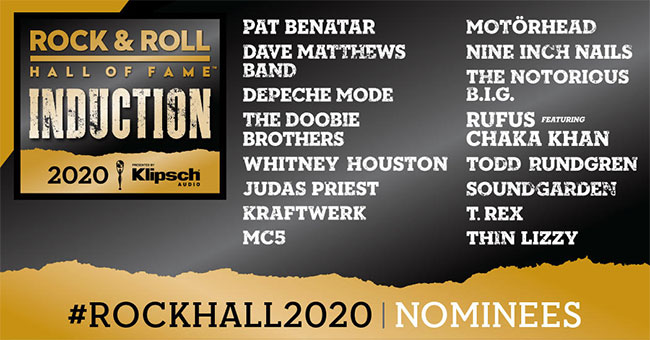 Let’s get down to it. This year’s nominees for the Rock and Roll Hall of Fame is actually quite impressive. Of course, there are some controversial musical choices people will obviously share their opinions about, including me. So, let’s just begin with the group that shouldn’t be part of the class of 2020.

Do not go in

Why? Thin Lizzy barely anyone really talks about. If you can’t name more than two songs from Thin Lizzy without googling it, they don’t belong in the Hall of Fame. They may have had their day before the lead singer’s death, but his death killed the band long before they could leave any kind of musical legacy. They were not The Doors or Nirvana whose lead singer’s death only made them bigger than life. Rufus Featuring Chaka Khan because they were great in their genre but really didn’t influence anyone outside of it. Their fan base is strong and Chaka Khan is one of the greatest, most electrifying singers, but their legacy hasn’t matched the talent.

T. Rex does have a rich musical legacy but their time for any serious consideration has come and gone. Should they be included, it’ll be a token consideration at best. Same with Todd Rundgren. The majority of voters were around during his heyday and will likely garner a few votes. If it were strictly still an industry only vote, he’d be in. But with fans now included in the voting process, he won’t get in. I certainly wouldn’t give him my vote (of course I was born in 1975 so I’m not a boomer but a Gen X’er. Can you tell where my votes are going to?).

Motörhead and Judas Priest, two cool metal bands but the Hall tends to be snobbish towards metal. Also, while they were influential in metal, they weren’t as widely influential as Black Sabbath or Metallica. Wait a few more years and they may go in during a weak year. Pat Benatar was Joan Jett-lite who had her best days during the early days of MTV, then that was it. Talented singer but if she gets in it’ll only be a token consideration because she’s a woman and for the Hall to proclaim once again, it’s the year of women in rock. This woman hasn’t earned hall of fame status.

Why? Depeche Mode, The Doobie Brothers, Kraftwerk, MC5 have all earned serious consideration for Rock and Roll Hall of Fame consideration. The Doobie Brothers have a great rotating cast of musicians who have gone on to play for other great bands, none better than Michael McDonald who went on to become of the great soul singers of all time. If he were nominated as a solo artist, he gets my vote. Plus, plenty of great tunes, a small dedicated following and still playing today over 40 years when they first formed, they deserve serious consideration in another year.

The same goes for Depeche Mode. Say what you want about 80’s new wave music, they were “the new wave” of music that helped defined the 80’s and 90’s. If The Cure are in, Depeche Mode should be in one day.

Where would punk and hip-hop music be without The MC5 and Kraftwerk, respectively? Early hip-hop artists sampled Kraftwerk’s music so much so that it became part of the sound of the new urban, musical art form. And no band was more punk than MC5 long before punk was a genre. Imagine a world without Television, The Ramones, Generation X. Thank the MC5 for that. Their time will come.

Why? Only five artists can be inducted, and this is who I would induct for the class of 2020. First and foremost, Whitney Houston. Go ahead, I dare you to name a better singer than Whitney Houston. I’ll wait and while I wait, yeah I get it; she’s not rock. Get over it. Sam Cooke, Ray Charles, and James Brown are charter members of the Rock and Roll Hall of Fame. Aretha Franklin, Smokey Robinson and Marvin Gaye joined them the very next year. And if you want to get even more technical, Bob Dylan, primarily a folk artist, and Johnny Cash, a country artist, are in the hall. Whitney Houston’s voice was the voice of God if God is a woman. Plus the hits, the many, many hit songs, albums, the artists she influenced during her career that continues today seven years after her tragic death. Not as many artists leave such a legacy as big as Whitney Houston did. She has rightfully earned a place in the hall. She’s not a once in a generation artist, there will never be another artist like Whitney Houston ever again.

Nine Inch Nails defined how beautiful darkness can be with their music, the basis of which formed what is now known as electronica, EDM today but much more bubblegum than it was intended to be. When alt rock and grunge were heard on FM radio during the 90’s (remember, there was no satellite radio and the Internet was barely a factor when it came to music) Nine Inch Nails were the black eye in the musical rotation but fit perfectly with the angst felt by Generation X. Voters of my generation will definitely cast a vote for NIN as would the Boomers would for artists of their era. But NIN were influencing bands during their heyday and continue to influence bands and artists today. Their latest EP trilogy showed the technical mastery Trent Reznor is known for and constantly delivers to his audience of loyal followers.

The Notorious B.I.G. deserves a nod and an induction now that Hip-Hop is recognized, rightfully so. Remember, this isn’t the rock music hall of fame, it’s the Rock and Roll Hall of Fame. I define rock and roll as any form of popular music released in the last 60 years that has dominated the music charts in that timespan. Who can say Hip-Hop hasn’t dominated the charts over the past 30 years? Notorious B.I.G. was poised to be its biggest (no pun intended) star but his career was cut short tragically. But the music he created remains hugely influential twenty two years after his death. He and Tupac ushered in more introspective, poetic lyrics and depth in their music which is standard now in Hip-Hop. Tupac is in so should his largely influential contemporary Notorious B.I.G. be in. No one changed Hip-Hop forever and for the better than Notorious B.I.G. did.

The Dave Matthews Band, do we even have to spell out the reasons why they belong in the hall of fame? A multi-cultural mix of artists whose music spoke to its audience, working their way up from college radio stations to top 40 superstars, and remaining a musical force for many years without ever pretending to be anything other than a band of working musicians of, by and for the people. Their music was influential, relevant, holds up well, and a lot of fun to listen to.

Soundgarden, admittedly, may be the weakest of the five nominees I’d cast a vote for, but I make no apologies voting for a band that helped define my generation. But Soundgarden was more than just another Seattle grunge band. They made sweet, melodic music that set them apart from their heavy on the bleak contemporaries. It was still angst-ridden but Soundgarden’s music also focused on moving forward and beyond, away from the darkness. Their heavy guitar riffs tracks, along with Alice in Chains, made their grunge rock sound metal but it still fit in perfectly with 90’s alt rock because the music spoke to us not at us. And with the loss of their sweet, soulful sounding lead singer Chris Cornell, Soundgarden leaves behind a musical legacy that will never again be duplicated.

Through January 10th, fans can google “Vote Rock Hall 2020” or any nominee name plus “vote” to cast a ballot with Google. Fans can also vote at rockhall.com or at the Museum in Cleveland.

The top five artists selected by the public will comprise a “fans’ ballot” that will be tallied along with other ballots to choose the 2020 inductees.

The Rock & Roll Hall of Fame 2020 Induction Ceremony will take place at Public Auditorium in Cleveland, Ohio on May 2, 2020.