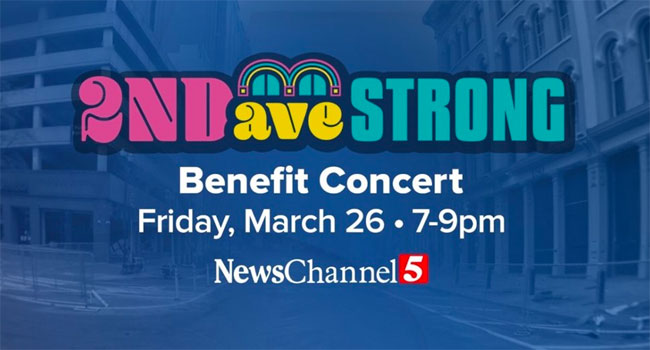 Event will be at Wildhorse Saloon

The concert will also take a look into the important role Second Ave has played in Nashville’s history and feature a tribute to the heroic first responders. Nashville Mayor John Cooper and Tennessee Governor Bill Lee will make an appearance. NewsChannel 5 in Nashville will air the live event at 7 pm CT and will be live-streamed.

“Giving back to the community speaks to the very heart of what we do every day through hospitality to our guests,
Wildhorse manager and show producer Brian Schafer shares. “The fact that we can join with the music industry to help rebuild this incredible neighborhood of an eclectic blend of artists, business owners, and community leaders is humbling.”

DISTRICT, Inc. and the Metro Historical Commission Foundation are hosting the event with hopes to raise $2 million towards the $10 million goal in restoring and preserving the important area. The funds will be used to help support structural assessments of and facade repairs to the irreplaceable historic buildings impacted by the explosion.

Anyone can donate via nashvillemhcf.org.