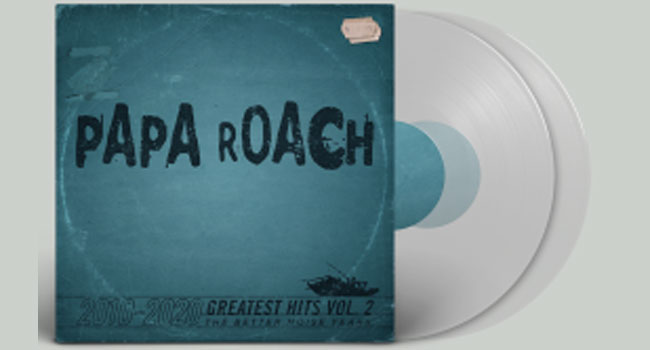 Papa Roach announces the upcoming release of their second collection of hit singles entitled Greatest Hits Vol. 2 – The Better Noise Years. The album, due out March 19, 2021, is comprised of 12 of the band’s top 10 hits released between 2010 to 2019. The set includes 21 tracks including three unreleased remixes and two unreleased acoustic recordings recorded Live at the YouTube Studios in NYC. The set also features a guest appearance by Asking Alexander vocalist Danny Warsnop on the track “Broken As Me.” The original version of the song was recorded for Papa Roach’s 2015 album F.E.A.R. The set will be available on CD and double gatefold smokey translucent vinyl as well as digital.

“We wanted to commemorate the last 10 years of our journey with this special collection of the music that got us here,” the band shares of the collection.

First single and video “The Ending (Remastered 2020)” has also been released. The song will be featured in the motion picture The Retaliators. The film is a horror thriller, and the music video includes footage from the movie. Jacoby Shaddix, Papa Roach’s lead singer, also makes his acting debut in a crucial role in the 2021 picture.

“When I heard about this film last year, I spoke to the creative team and I felt I had a vehicle to see if I could expand my range as an artist. Truly, I couldn’t have imagined how much I enjoyed this experience and can’t wait to find another film in the future,” explains Shaddix. He appears alongside a diverse cast, which includes Michael Lombardi (FX’s Rescue Me, The Deuce), Marc Menchaca (Ozark, Black Mirror, The Sinner) and Joseph Gatt (Ray Donovan, Game of Thrones, Banshee, Dumbo) in the high-octane horror thriller.

Lombardi, who is also a co-producer on the film, says of Shaddix’s acting in the role of Quinn Brady, “I wasn’t sure what to expect. I thought he might be good because he’s a great storyteller with his songs, but I was truly blown away by his performance as an actor. I found Jacoby to be incredibly focused and committed! He was never afraid to jump off that cliff. For example, he and I had a scene together where his character has to slap me, pull my hair and lick my face. Lucky for me we only needed two takes, because he 100% went for it. I had a red, smacked, wet face when the director yelled cut. He’s a beast!”

Papa Roach has remained relevant since their debut in 2000. Now 20 years in, the band currently has over eight million monthly listeners on Spotify with total streaming numbers into the billions. Papa Roach has released 21 Top 5 singles over the course of their distinguished career – 12 of which are included in the new greatest hits collection from the past 10 years. “Help” the band’s 2017 release has just been certified gold by the RIAA, selling over 500,000 copies in the United States alone.