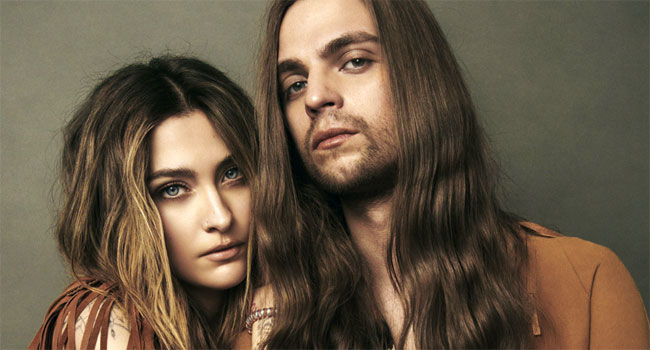 The Soundflowers, featuring Paris Jackson and Gabriel Glenn, debuts the official video for “Your Look (Glorious).” The full-length video was executive produced and shot by Prince Jackson via his production house King’s Son Productions.

This morning (Tues, July 14th), Paris and Prince appeared on Good Morning America to discuss The Soundflowers, “Your Look (Glorious)” and more. On collaborating with Prince, Paris says, “I was really comfortable working with my brother, it just felt natural.”

The Soundflowers’ six-part Facebook Watch Original Docuseries, Unfiltered: Paris Jackson & Gabriel Glenn, is currently airing every Tuesday at 6 am ET/3 am PT through August 4th. The docuseries explores the band’s journey together beyond the music.

The Soundflowers was born after Jackson and Glenn first crossed paths at Los Angeles’ Rainbow Bar and Grill during a TrashDögs performance, the rock ‘n’ roll band fronted by Gabriel. They quickly realized that their musical energies and passions aligned, as Jackson recalls, “I started writing around 13 when I bought myself a guitar; I didn’t really start sharing or recording it until I met Gabriel.”

“We showed each other songs and even wrote a few on the spot,” Glenn says of the first time the pair worked together. “Everything fit together so naturally, from our voices to our songwriting style. I had never met someone who fit so perfectly with my sound.”

The sound behind The Soundflowers is an eclectic take on indie acoustic and folk music, as the band attributes their songwriting to influences like The Beatles, Joe Purdy, Ray LaMontagne, Radiohead and The Lumineers. While Paris Jackson hails from one of the most successful families in music history, she is best known for her activism, acting and modeling work, the latter of which has seen her front campaigns for international brands like Calvin Klein, gracing the cover of top fashion magazines, including Vogue and Harper’s Bazaar titles and making her runway debut earlier this year at Jean Paul Gaultier’s final show. On the acting front, Jackson has taken on several TV and film roles, collaborating with acclaimed industry professionals, including Lee Daniels, Charlize Theron, Joel Edgerton and Rachel Winters. Aside from music, her biggest passion has always been in using her platform to shine light on causes important to her, notably going off-script while presenting at the GRAMMY Awards and MTV VMAs, to highlight the Dakota Access Pipeline and events of racial injustice in Charlottesville, respectably. Paris also serves as an Ambassador for the Elizabeth Taylor AIDS Foundation (ETAF) and is passionate about continuing her godmother’s legacy of ridding the stigma and finding a cure for the HIV/AIDS pandemic.

Gabriel Glenn has always leaned into his musical talents, which first emerged while singing in the car with his mom on the way to school and further cultivated by forming bands with friends in his youth and studying music at the collegiate level in his home state of Louisiana. Upon moving to Los Angeles several years ago, Gabriel and a couple close friends formed the “desert rock ‘n’ roll” band TrashDögs, which has found local success performing at popular haunts along the Sunset Strip. Upon meeting Paris and forming The Soundflowers, Gabriel feels more complete as an artist: “She creates so naturally and honestly; it inspires me to be a better songwriter. I think having a unique spirit like hers allows us to channel things we’d never receive on our own.”