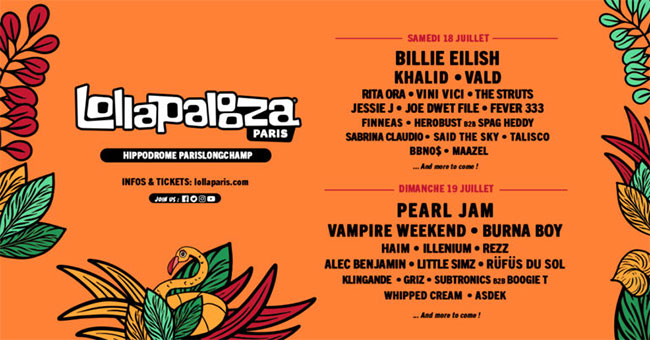 The fourth annual Lollapalooza Paris has revealed a portion of its lineup, including headliners Pearl Jam and Billie Eilish, along with Vampire Weekend, Khalid, Burna Boy, Haim, Rita Ora, Illenium, The Struts and many more. Additional artists will be announced early next year. More than 40 artists will perform on four stages at Hippodrome De Longchamp on July 18-19, 2020. Tickets are on sale now at lollaparis.com.

The news comes as the lineup for the second annual Lollapalooza Stockholm has been revealed for 2020 with Pearl Jam, Post Malone, Ellie Goulding, Zara Larsson, The Killers, Kacey Musgraves, Kendrick Lamar, Camila Cabello and others. The lineup features more than 55 artists including Galantis, Of Monsters and Men, Rival Sons, Rex Orange County and many more performing on four stages on June 26-28, 2020 at Gärdet, a beautiful park in the heart of Stockholm, Sweden.