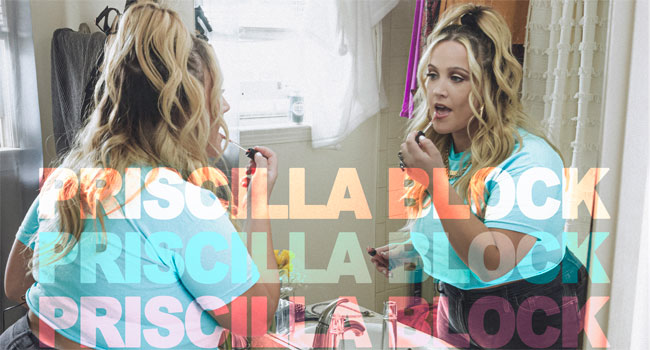 “Wish You Were The Whiskey” Out Now

“This EP is such a vulnerable side of who I am and where I’ve been,” shares Block. “It’s my story of falling apart in order to find myself again. I hope that when you hear these songs, they make you feel that it’s ok to not be perfect and realize that sometimes we need the lows to value the highs… AND ONCE YOU REGAIN THAT CONFIDENCE… LET IT SHOW BABY!”

Block draws listeners in with her unfiltered, relatable songwriting and catchy melodies and is one of country music’s hottest newcomers. Named an artist to watch by Amazon, Pandora, Spotify, HITS, CMT Next Women of Country and more, Block wrote each of the six tracks featured on the Priscilla Block EP including one of The New York Times Best Songs of 2020 and her current country radio single, “Just About Over You,” and her new song out now, “Wish You Were The Whiskey.” Block’s grassroots, fan-first approach continues as she plans to share the full track list via her socials in the weeks leading up to the April 30th EP release.

Additionally, Block is set to make her debut on the storied Grand Ole Opry May 1st. Fans can tune in live on Circle TV or can watch it on a livestream on Circle All Access Facebook, YouTube and Twitter channels.

Country artist Priscilla Block draws listeners in with her unfiltered, relatable songwriting and catchy melodies. Pegged as a 2021 Artist to Watch by Amazon Music, PANDORA, The Boot, MusicRow, Sounds Like Nashville, Country Now, Music Mayhem and more, Priscilla’s honest and upfront approach promotes self-love, empowerment, and acceptance through her own blend of country pop and southern rock, dubbed the Block Party sound.

In early 2020, Block was struggling to make ends meet after losing her job and her apartment. Unable to get out and play in person due to COVID-19, Block began experimenting on TikTok and quickly developed a rabid fanbase with songs like “Thick Thighs,” “PMS” and “Just About Over You.” Fans rallied together to independently fund Block’s recording and since then, “Just About Over You” has peaked both the iTunes Country and All-Genre song charts, the song was named one of The New York Times Best Songs of 2020, and it is now playing on country radio.

Originally from Raleigh, NC, Block moved to Nashville to pursue music shortly after high school. In Nashville, the affable, hardworking, student of life worked multiple jobs to make ends meet, then a chance encounter with her idol – Taylor Swift – was the sign she needed to dive all the way in on her music. Block is a seasoned performer playing sold out shows across the southeast including Deep South the Bar in Raleigh, the storied Listening Room Cafe, and Nashville’s rowdiest block party, Whiskey Jam. Block has also shared the stage with artists including Gabby Barrett, Adam Craig and Adam Doleac.