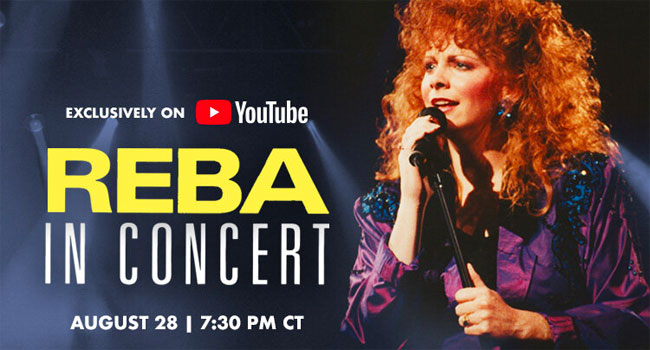 Due to popular demand, Reba McEntire is set to relaunch another concert special exclusively on YouTube this Friday, August 28th. Marking the first time this special will be available digitally, Reba In Concert features some of the entertainer’s biggest hits including “Fancy,” “You Lie” and “Whoever’s In New England.” The show was filmed in 1990 at the Frank Erwin Center in Austin, Texas, and serves as a dedication to Reba’s original band members (included in the special) who were tragically lost in a plane crash the following year.

Featuring 16 iconic performances, Reba In Concert will premiere at 8:30 pm ET, and Reba will again celebrate with fans through a chat on her YouTube channel.

“This show is very special to me because it features my friends that we lost in a plane crash 29 years ago,” shares Reba. “Their love for music and incredible talents deserve to be seen again, and I’m so glad that we’re getting the chance to stream this concert for the first time ever. I can’t wait to watch it and I hope they will feel all the love we still have for them.”

The special was released on VHS and LaserDisc in 1991.

It was recently announced that the Country Music Hall of Fame member is set to re-release her legendary album, Rumor Has It, in celebration of the 30th anniversary. The album includes four Top 10 hits including the title track, “You Lie,” “Fallin’ Out Of Love” as well as “Fancy.” In addition, the anniversary edition vinyl will include a bonus track, a live acoustic version of “Fancy” recorded at The Ryman, while the CD and digital versions will feature that bonus track and a new dance remix of “Fancy.” Special CD, vinyl and autographed bundle packages are available featuring items such as a commemorative lithograph, limited-edition t-shirt and more.