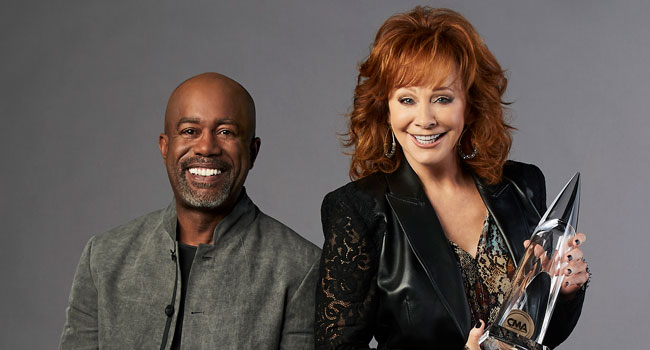 The Country Music Association has revealed that country music superstars and previous CMA Awards winners Reba McEntire and Darius Rucker will host The 54th Annual CMA Awards live from Nashville on Wednesday, November 11th from 8-11 pm ET on ABC. Country Music’s Biggest Night will take place from Music City Center in downtown Nashville and will feature the biggest artists and performances in country music. McEntire and Rucker came together to announce the news live this morning on ABC’s Good Morning America.

“I’m thrilled to be back hosting the CMA Awards and even more thrilled that I get to share the stage with Darius Rucker,” says McEntire. “We’re looking forward to a night of celebrating great country music and hope you’ll tune in and watch!”

“I look forward to the CMA Awards every year because of the incredible performances and the opportunity to celebrate the year in country music,” adds Rucker. “To be invited to host this year’s awards alongside Reba — are you kidding me?! — it is an absolute honor. Even though this year will look a little different than normal, I know that we’re all eager for a night of musical celebration, and this year’s show definitely won’t disappoint!”

Rucker joins the CMA Awards stage for the first time as host, while McEntire returns for the fifth time.

“We are beyond thrilled to welcome Reba and Darius as this year’s CMA Awards hosts,” states Sarah Trahern, CMA Chief Executive Officer. “Their playful chemistry and genuine warmth are exactly what we know our viewers want to see this year. We look forward to bringing fans a night of celebration, live performances and a television experience unlike any other. We cannot wait to share more details about our show in the coming weeks.”