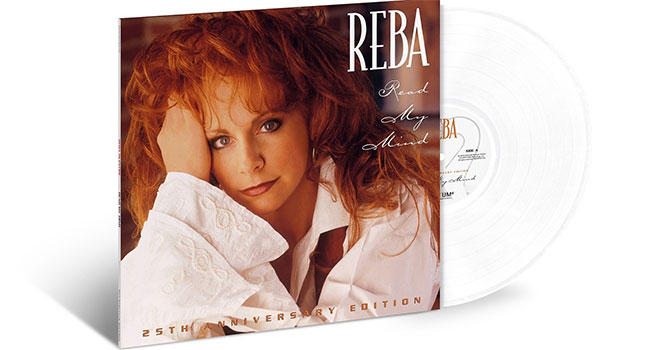 By the time an artist releases their 18th studio album, there’s usually not much they haven’t accomplished by then but for Reba McEntire it was just another way she smashed the mold and created several new career milestones. Upon releasing Read My Mind in 1994, the album went on to sell more than three million copies, becoming one of the most popular of her career, and earned Reba her first Billboard Hot 100 single with the aching ballad, “Till You Love Me.” Along with singles, “Why Haven’t I Heard From You,” “She Thinks His Name Was John” and “The Heart Is A Lonely Hunter,” which all dominated the country chart, Read My Mind was one of the biggest albums of the year, soaring to No. 2 on both the country album chart and Billboard 200. The record was also a launching pad for many firsts for the country megastar including her New York Times best-selling autobiography, “Reba: My Story,” as well as her first-ever NBC Television concert special, filmed while she toured more than 60 dates across the United States and Canada.

Despite all those landmarks, there’s one the album has yet to receive, until now. To celebrate the 25th anniversary of Read My Mind, MCA Nashville/UMe will release the album on vinyl for the first time ever on December 6th. The triple platinum album will be released in several expanded anniversary editions with a new bonus track, a live performance of “And Still,” complete with Reba’s humorous story of filming the video in Guatemala. Read My Mind will be available on both standard black vinyl and as a limited edition color pressing on white vinyl, available exclusively at Reba.com. The 25th edition of the album will also be released digitally and on CD for the first time in 12 years. Exclusive merch bundles include a signed vinyl boxed set, a signed lithograph and a limited edition t-shirt.

“I love every single song on this album, and I am so proud that all these years later my fans still want to hear them in our live shows,” Reba writes in the heartfelt new liner notes accompanying the anniversary editions. “A lot of the songs on this record have become career-defining songs for me. I can’t imagine doing a show now without the crowd singing along to ‘Why Haven’t I Heard From You.’ There were also songs on this record, like the AIDS message song ‘She Thinks His Name Was John,’ that went beyond entertainment and hopefully affected some hearts and minds with a story that no one was talking about at the time. I am very proud to have been able to be the conduit for these incredible songs.”

Read My Mind was produced by Reba and longtime producer Tony Brown who worked together on several of her acclaimed albums of this era. Launching with the first single, “Why Haven’t I Heard From You,” which peaked at No. 5 on the country chart, the record spawned five hit singles which were supported with a series of iconic videos, including the aforementioned song’s highly imaginative video that showcased Reba’s comedic acting chops as she danced and sung in a musical theater-inspired dream sequence. The cinematic video for “And Still” was beautifully filmed in a Guatemalan village over four days while the video for “She Thinks His Name Was John” was an emotional live performance of the powerful song that saw Reba courageously addressing the HIV/AIDS crisis head on. The song gained media attention and controversy for its subject matter about a woman dying from AIDS she had contracted during a one-night stand. Rolling Stone recently declared it as one of “40 Saddest Country Songs Of All Time,” writing, “it remains country music’s highest-profile response to the crisis.”

For both lifelong and more recent fans, the 25th anniversary edition of Read My Mind provides a perfect opportunity to revisit one of Reba’s most beloved albums or to fall in love with it for the first time.