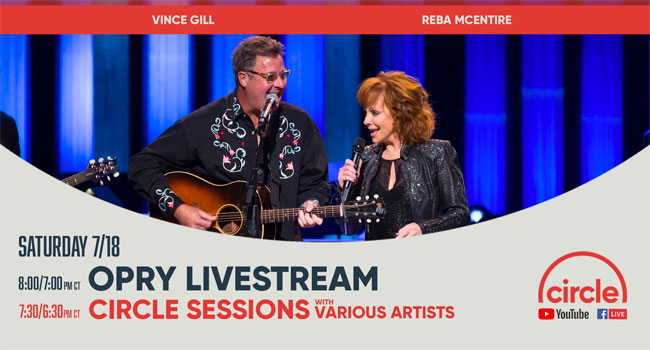 Performance will be hosted by Bobby Bones

Reba McEntire and Vince Gill are set to celebrate their 40 year friendship as the headliners of the Grand Ole Opry’s 4,933rd consecutive Saturday night broadcast on July 18th. The performance will broadcast live on Circle TV and Gray TV stations, DISH Studio Channel 102, Sling TV and other TV affiliates, as well as livestreamed on wsmonline.com. The audio can be heard on SiriusXM.

“She is arguably one of the greatest singers that will ever draw a breath,” Gill says of McEntire, his frequent duet partner throughout the 90s.

“The Grand Ole Opry has always been very special to me and my family,” McEntire shares. “It’s part of my history, my heritage and my future, and I’m so excited to get to share the stage with Vince again. Just like Roy Acuff, Minnie Pearl, Brother Oswald, Porter Wagoner and Loretta Lynn, Vince is an Opry legend. I’m proud to be an Opry member and I’ll always be proud to stand on the stage with Vince. Things may be a little different right now, but one thing stays the same – the Opry continues to bring great country music into the homes of the American people.”

Bobby Bones will once again host the audience-less broadcast that begins at 8 pm ET/5 pm PT. The livestream starts early at 7:30 pm ET/4:30 pm PT as a Circle Sessions pre-show.

Fans can purchase an exclusive 11×17″ concert poster representing the event via the Opry’s webstore. One hundred percent of the proceeds from the poster will go to The Opry Trust Fund to assist those in the country music industry by offering financial assistance during their time of need. The poster is $20 and includes free shipping.

The Grand Ole Opry is the show that made country music famous. The Opry features a dynamic line-up of new stars, superstars, and legends of country music. Unlike a typical concert, the Opry presents one or more artists on each show, giving the audience a sample of each artist’s musical style.

The Opry has partnered with MusiCares to bring fans the #UNBROKEN campaign to raise money for MusiCares’s COVID-19 Relief Fund, benefiting artists and music professionals affected by the crisis. Text UNBROKEN to 41444 to donate.

So excited to be back at the @opry with @VGcom next Saturday, July 18th! https://t.co/Xod7jOQ1Jd