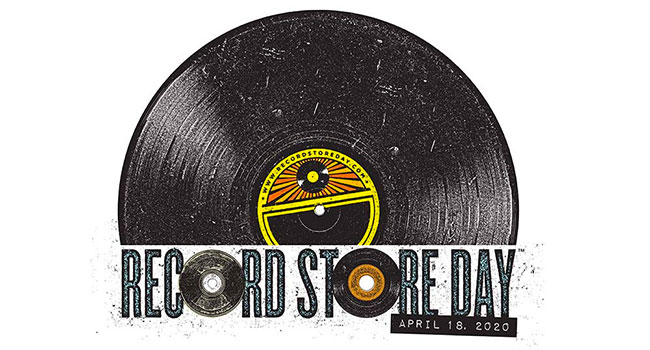 The Record Store Day 2020 list every album collector has been waiting for has arrived. The annual event that celebrates physical media — most notably vinyl — will take place Saturday, April 18th at independent record stores worldwide. With U2, Paul McCartney and David Bowie announcing their releases early, the full list displays a gamut of genres featuring popular artists and soundtracks including Britney Spears, Post Malone, The Rolling Stones, Toto, Eminem, Fleetwood Mac and more.

The list contains hundreds of releases, and can be seen at the RSD website. We will detail a few notable ones below. Brandi Carlile has been tapped as Record Store Day Ambassador 2020.

Post Malone is releases a series of 3″ singles. They include “Goodbyes,” “Souvenier De Sant-Trupes,” “Sunflower” and “Wow.” Two thousand of each will be pressed.

Alice Cooper will release Live from the Apollo Theatre Glasgow Feb 19.1982 on 2xLP. The set features a classic performance from his Special Forces Tour. This recording is largely unreleased: only three tracks — “Who Do You Think We Are”, “Under My Wheels” and “Model Citizen” were previously released as 12″ B-sides in 1982, and have not been available since. Seven thousand copies will be pressed.

Eminem will release a 7″ single of “My Name Is”/”Bad Guys Always Die.” Only 2000 copies will be pressed worldwide.

Fleetwood Mac is releasing The Alternate Rumours on LP. It’s an album of alternate takes mirroring the original album, from the Rumours Deluxe Edition. Alternate takes include early versions and alternate versions for “Gold Dust Woman,” “The Chain,” “Don’t’ Stop,” “Dreams” and “Second Hand News”. This is the project’s first appearance on vinyl with 16,000 in circulation.

One of the rarest releases will be by The Rolling Stones with the Let It Bleed (Limited Collectors Edition). Only 900 copies will be handcrafted on the press, using layers of color on top of one another to create a truly unique edition. Due to the nature of the manual process to pour each color onto the press by hand, each piece is unique in design. Hand-numbered Certificate of Authenticity included.

Skid Row will release an expanded and uncensored edition of its sophomore album Slave To The Grind on solid red 180-gram vinyl for the first time in 29 years. Run Out Groove expands it to a 2xLP set by including four bonus tracks making their debut on wax. It’s presented in a deluxe tip-on style gatefold jacket, with insert and only 2500 being made.

Britney Spears will release Oops!…I Did It Again (Remixes and B-Sides) in celebration of its 20th anniversary. This new collection, exclusively on vinyl for Record Store Day 2020, features four rare remixes of the hits “Oops!…I Did It Again,” “Lucky,” “Stronger” and “Don’t Let Me Be The Last To Know,” plus four rare songs from the album sessions only released outside the U.S., including a cover of The Jets’ classic ballad “You Got It All.” Only 4600 copies will be pressed.