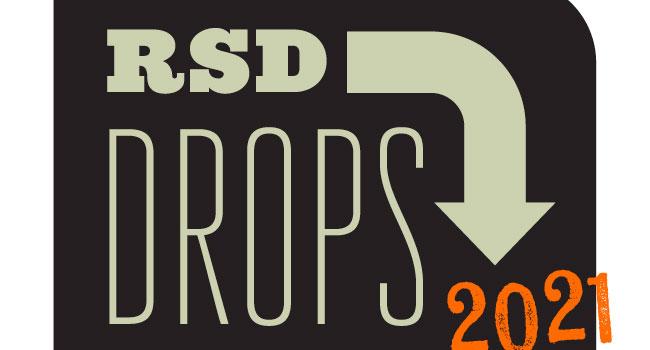 Record Store Day has released the list of special titles coming for RSD Drops 2021 for June 12th and July 17th at participating independent stores worldwide. There is one List, with titles broken out for each date. AC/DC, Beck, Black Sabbath, The Doors, Bob Dylan, Ariana Grande, Elton John, Lady Gaga, Pearl Jam, Tom Petty, The Police, Prince, U2, Motley Crue, and dozens of others are on the List.

“Things are improving but in this continued ‘unprecedented global situation,’ where production and shipping is still in a state of struggle, the focus of these two Drops dates is on bringing revenue to the stores– as well as to the artists, labels, distribution and every other business behind the scenes making record stores work, in a fiscally and socially responsible way,” organizers share. “The spread of titles over two dates in two months allows some flexibility for the struggling vinyl pressing plants and distribution companies as well as provide stores time to prepare budgets and place the orders that safely get music into the hands of customers on a larger than normal release day.”

Pearl Jam is celebrating the 30th anniversary of its iconic album Ten in 2021. “Alive” was the first single from their eponymous debut and 30 years later it’s being reissued as both a 12” and a cassette single on July 17th. The 12” features the original promo single version of “Alive” plus three rare b-sides: “Wash”, “Dirty Frank” and the Beatles’ cover “I’ve Got A Feeling.” which is currently not available anywhere else. All four tracks are included on side A while side B contains an etching of the band’s Stick Man logo. The “Alive” cassette single is a replica of the promo cassette that was originally used around the album’s release. It includes the promo single version of “Alive” plus “Wash” and “I’ve Got A Feeling,” repeated on both sides.

U2 will release a remastered version of Fire, on picture disc, for the June 12th RSD Drop. Recorded in spring 1981 during a break on the Boy Tour, “Fire” was the first single from the band’s second studio album October, with J Swallow as the B-side. This 40th anniversary picture disc vinyl edition features “Fire” and “J Swallow” on Side A, plus two live recordings of “Fire” on Side B. The first is from Werchter Festival in Belgium in July 1982, the second from a BBC recording at the Hammersmith Palais, London in December 1982. All tracks have been remastered. It’ll be packaged in a transparent heavyweight PVC outer sleeve featuring a sticker with credits.

Warner Records will release Angel Dream (Songs and Music from the Motion Picture She’s the One) by Tom Petty on June 12th. The set is a special reimagining of the album She’s The One to celebrate the 25th anniversary of its original release. This also brings to a close the celebration of Tom Petty’s masterpiece Wildflowers, as most of the songs on this album were recorded during the same time period. She’s The One included some songs that were left off the original Wildflowers album, recently included in the Wildflowers & All The Rest re-issue. To take the place of those songs, four previously unreleased songs have been added here – two Petty originals (“105 Degrees” and “One of Life’s Little Mysteries”), a cover of JJ Cale’s “Thirteen Days”, and the instrumental “French Disconnection”. An extended version of “Supernatural Radio” is also included. The album has been remixed and remastered and brand new cover art commissioned – emphasizing that this is a Tom Petty & The Heartbreakers album, rather than a soundtrack album. This very special version for RSD Drops is pressed on cobalt blue vinyl.

Motley Crue will release an exclusive set of five cassettes to commemorate the band’s 40th anniversary on June 12th. 40th Anniversary Cassette Box Set includes their core catalog titles (Too Fast for Love, Shout at the Devil, Theatre of Pain, Girls, Girls, Girls, and Dr. Feelgood) with artwork. This product is an exclusive, limited run for RSD Drops of 1750 copies worldwide. Other Crue 40th anniversary releases are expected later in the year.

AC/DC releases an exclusive limited collector’s edition picture disc as part of RSD Drops 2021 on June 12th. The 12” vinyl includes “Through The Mists of Time” and “Witch’s Spell” from the global No. 1 album Power Up, housed in a PVC jacket with an OBI strip at the top.

The Prince Estate will issue The Truth, which is widely regarded as one of Prince’s most underappreciated hidden gems, on June 12th. Originally released as an accompaniment to the 1998 triple album Crystal Ball, which marked the first time that Prince released an album totally independently, The Truth was also the first Prince album to be labeled “acoustic,” though it does contain electronic instruments and elements, and it gave listeners an unprecedented chance to hear his songwriting and voice in a stripped-down presentation. This purple vinyl release as part of RSD Drops marks the first time The Truth is available on vinyl, with gorgeous, foil-embossed artwork designed by Prince’s long-time art director Steve Parke.

The Doors’ famed studio album Morrison Hotel recently celebrated its 50th anniversary, unearthing rare session tapes from the original recording sessions. Exclusively for RSD Drops 2021, Morrison Hotel Sessions will be pressed on vinyl for the first time, offering listeners a fly-on-the-wall experience to hear The Doors create “Roadhouse Blues,” “Peace Frog/Blue Sunday” and “Queen Of The Highway” from the masterpiece album. The limited edition package – which was mixed and assembled by The Doors original engineer Bruce Botnick – is pressed on 180-g double vinyl and also features new liner notes from Botnick. Strictly limited and numbered to 16,000 copies worldwide, the set will be available June 12th.