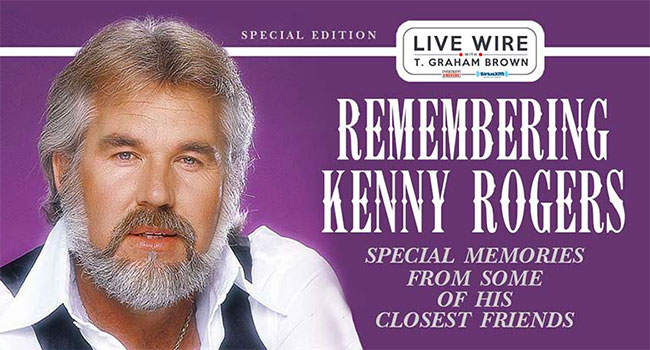 Country hit-maker T. Graham Brown will host Remembering Kenny Rogers special to premiere Friday, March 27th at 9 pm ET on SiriusXM’s Prime Country Channel 58. This heartwarming two-hour show will feature live cuts from Kenny Rogers’ Live By Request album and more. As part of the tribute, some of Rogers’ closest friends share their most precious memories and remember Kenny Rogers through the years. T. Graham Brown hosts Live Wire each month on the channel, showcasing live cuts and interviews with some of T. Graham Brown’s closest friends and heroes while sharing fun stories about life on the road.

“Kenny Rogers was larger than life in so many ways,” explains T. Graham Brown. “I toured the country doing shows with him and heard his hits night after night. Just about everyone in country music during his career opened for him and it is hard to imagine a world without Kenny. Thankfully his music will live on in our hearts and with the help from those who loved him the most, we have a great show, remembering our “Sweet Music Man” from all “Through The Years.”

The special is also available on-demand worldwide with the SiriusXM app and Pandora NOW with a standard SiriusXM subscription.