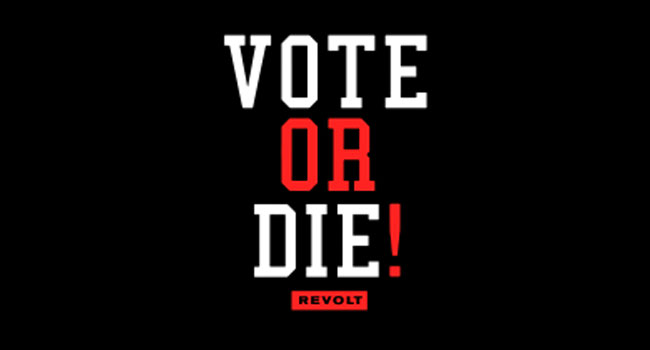 VOTE or DIE! programs include Our Black Party Town Hall, election-themed episodes of REVOLT Black News, a Views From the Youth Study and more

Approaching this year’s General Election on November 3rd, REVOLT has relaunched Sean “Diddy” Combs’ widely popular VOTE or DIE! initiative, to rally the next generation of leaders to exercise their right to vote in this critical election.

As we face a pivotal turning point in our nation’s history, being politically active means more than selecting a President; it symbolizes your right to take action now. REVOLT recognizes “Vote or Die” is relevant now, more than ever.

“Our research shows that the youth are desperate for a definitive shift in how America works, so it’s critical that we inform and politically activate this generation to take action and define the future,” says Detavio Samuels, Chief Operating Officer, REVOLT TV.

To reintroduce VOTE or DIE!, REVOLT will launch a campaign profiling artists, athletes and cultural leaders wearing the symbolic VOTE or DIE! t-shirt. During the month of October and November, REVOLT will host weeks of VOTE or DIE! content on its platform.

Black Voices on Mute, a short-form content series created in collaboration between REVOLT and Xfinity, will air on the channel and Xfinity platforms for the weeks leading up to the November election. The series will document the ways the American system has tried to suppress the black vote. T-Pain narrated the first episode.

On October 15th, a special election episode of REVOLT Black News that covers the Our Black Party town hall.

From October 23rd-25th, will hold its summit that includes a workshop that equips the audience with the tools needed to vote in this year’s election. In addition, REVOLT will bring back last year’s election-themed panel, which went viral after an exchange between rapper Killer Mike and political pundit, Candace Owens.

The network is hosting ONE Musicfest, a virtual political pep rally and music festival to enact its longtime mission of Unity Through Music. Scheduled to take place on November 1st via YouTube, and the One Musicfest, REVOLT TV and the Roots’ YouTube platforms, the “pre-party to the polls” is a three-hour digital celebration of the festival’s rich history and culture, and our civic responsibility to Get Out The Vote. ONE Musicfest will feature performances by some of the hottest names in R&B and hip hop, as well as some of the best performances of the fest’s past decade from artists including Wu-Tang Clan, T.I., The Roots, Ari Lennox, Jill Scott, H.E.R., DMX, KP the Great featuring Pharrell, Usher and more.