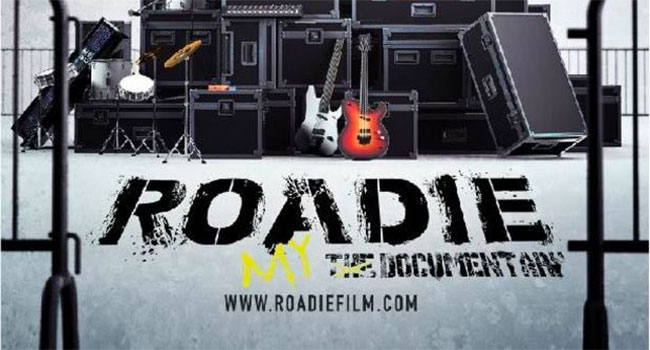 Unapologetically indie, Roadie: My Documentary spans the 20-year career of roadie turned filmmaker, TJ Hoffmann. Alongside his co-director and co-writer, Andy Strohl, Hoffman takes you behind-the-scenes and on-the-run with rock ‘n’ roll, R&B and pop road crews for some of the most epic acts in music history to better understand the unique perspectives of the profession and its enormous impact on the evolution of music around the world and back again.

“I wanted to go on the road for adventure, to be part of something larger than myself. Something amazing. Something no one could do alone. And I did,” says Hoffman. “I was part of the touring industry during a pivotal time in music. Me. A part of it. A tiny little speck, but a part of it nonetheless.”

No matter how they’re defined, either as a hard-core roadie, instrument tech, or jack of all things backstage, their presence and impact is undeniable, earning the utmost respect from many of the top performers they’ve helped to launch and support along the way.

“Techs not only can do what we do, but they can fix a broken amp in ten seconds or less,” says Ron ‘Bumblefoot’ Thal, former guitarist for Guns N’ Roses. “They all have skills that we don’t, plus they’re all musicians as well. We couldn’t do what they do, but they could do what we do.”

Filmed in a handful of countries over the course of ten years, Roadie began as a quest to find out what was the passion, motive or moment that made someone want to become a roadie. But over time, another narrative is discovered. Hoffman, the man behind the camera, begins to see himself more clearly through the lens as he’s interviewing others and is forced to confront his own inner demons from decades of life on the road.

Music and history fans ready for a taste of roadie life should go to roadiefilm.com. The site showcases the movie trailer and includes a link to purchase on-demand access to the full-length film. The film is being offered exclusively on the Guiding Star Global digital content platform worldwide. Through February 29th, the film is specially priced at $12.99 and includes roadie bonus stories. After purchase, the film can be viewed online using a computer or SmartTV. Viewers can also access the film on-the-go using the free Guiding Star mobile app for both Android and iPhone devices.