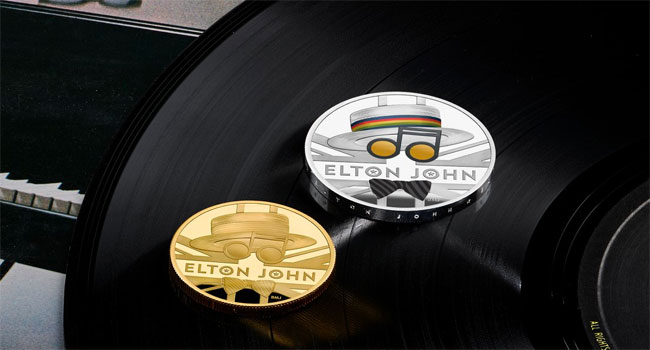 In 2020 The Royal Mint is celebrating some of the country’s most important artists – individuals and bands who have helped shape the UK’s love of music. No such collection would make sense without the inclusion of Elton John, the superstar who has been delighting fans for more than half a century.

The Royal Mint is honoring John with several limited edition commemorative coins. Eleven have been announced so far, with more expected in the future.

“It really is a fabulous honor to be recognized in this way,” John says on Facebook. “The last few years have contained some of the most memorable moments of my career, and this is another truly humbling milestone on my journey.”

In addition to the coin collection, John and The Royal Mine are also working together to create a special one‐off collector’s piece, which will be auctioned later this year. The unique coin will help raise vital funds for the Elton John Charitable Trust at a time when the wider charity sector has been hit with a reduction in donations.

Fans can reserve the coins and sign up to learn about future ones via The Royal Mint’s website.

The coin design honoring this music legend was created by Bradley Morgan Johnson. With any number of famous looks from which to draw inspiration, Bradley chose to depict the performer wearing his famous music-note glasses and straw boater’s hat. This commemorative coin is a great way for fans and admirers to pay tribute to this incredible artist.

Born Reginald Dwight, Elton John displayed remarkable musical talent at a very young age. This underlying musicality and a passion for rock ‘n’ roll drove him to breakthrough from pubs and blues bands to become a global sensation. He has made more than 4,000 performances in over 80 countries and sold in excess of 300 million records worldwide. Elton John is without doubt a British music legend.